Scotland seeking a magic mix of good instincts and commonsense 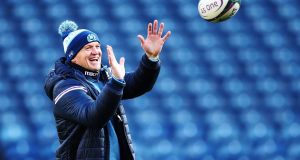 Scotland coach Gregor Townsend: he is receptive to ideas from his coaching team, and will always test his own theories on the game in a practical way. Photograph: Ian MacNicol/Getty Images

Drawing a straight-line correlation between Gregor Townsend the former player and his rugby philosophy as a coach may be a fool’s errand for those who seek to attach a label.

To the naked eye the differences may not be immediately obvious to those that are distracted by style issues, but a superficial comparison reveals only a partial truth that can be misleading.

An elegant outhalf for Scotland, winning 82 caps and a further brace for the British and Irish Lions in South Africa (1997) over a decade at Test level, a playing career that took him to England, France and South Africa as well as a couple of spells with the Border Reivers, his instincts were to run and pass, his forte creating and exploiting space.

A brief period as a player/coach with the Border Reivers before the franchise was disbanded (2007) preempted a switch to a full-time career with a tracksuit and whistle, both as assistant (Scotland A, Scotland), then the head honcho at the Glasgow Warriors (2012-2107) and since June,2017 the Scotland national team.

In examining the playing patterns of the teams that he coached there is a misconception that they can be traced to Townsend’s DNA as a player. The framework beneath the expansive playbook, the offloading and the high-octane tempo isn’t loosey-goosey but instead one built on more prosaic foundations.

Dan McFarland worked as assistant coach to Townsend at both the Glasgow Warriors and the Scottish national side before taking up his current position as Ulster’s head coach earlier in the season. He knows the qualities of Townsend, the person, the coach, his friend; to understand what drives the 45-year-old Scot there are a couple of peripheral factors worth noting.

Townsend is fiercely patriotic, and views the position that he now occupies as the ultimate honour, one to which he always aspired. He is relentless in his thirst for knowledge, and will draw down from disparate sources. He is meticulous and thorough in preparing his teams. And, yes, there is a script.

McFarland explained: “People often make a mistake in that they associate the style in which Gregor played as the same as the way he coaches, and that’s not the case.

“There are elements of that free spirit people associate with his playing days. People would have looked at the Glasgow style of play, and the first thing you would remark on is that this is just a loose, offloading team; whereas that is not the case at all. Under Gregor they were a team very process-driven, not totally structured but there was a clear structure to what they were doing.

“In and around the offloading even on first phase there were process-based things. Gregor loves an offload, he loves the ability to move the ball and play with opportunity, or have players looking for opportunity; all of it is part of the process.

“Even though you would see in Gregor’s teams that willingness to play, willingness to take opportunities when they are presented, there is accountability on the process within that as well. It’s not just a do-whatever-you-want [philosophy] at all; that’s often how Glasgow were characterised and it is not the case at all.”

Townsend encourages players who are free spirits to express themselves on the pitch once they understand that they form part of a bigger plan. He fosters an environment where players come to learn, to improve, to evolve but enjoyment is a core principle.

McFarland admitted: “When guys come into Scotland camp it isn’t about stress, it’s not about pressure, it’s 100 per cent about standards of excellence and performance, but there is also an enjoyment element to it. Nobody dreads coming into camp; they just feel invigorated as if they are going to learn something.”

Townsend empowers his players as the parameters of what they do are not set in stone. A quick 22, lineout, tap penalty or to run the ball in the shadow of the Scottish goalposts are actively encouraged; good instincts fortified by commonsense.

Scotland pride themselves on being a very fit team, and their coach has put a significant emphasis since taking over on speeding up the play and increasing the ball-in-play time where possible. That was evident in last weekend’s opening Six Nations championship victory over Italy, and it is likely to be evident again when Ireland come calling to Murrayfield on Saturday.

So is there an appreciable difference in style or orientation between Townsend’s Glasgow Warriors and the current national side?

“No, I don’t think so,” said McFarland. “There is an evolution. It is the same style of play on a philosophical level. He plays a similar shape to how he would have played then.

“I think the biggest thing is the evolution of the speed at which they want to play; having an element to quicken up the game. One of the things that really characterises Gregor is that he is always trying to evolve, think and change and do different things; he is very open-minded but he has a very clear growth mindset which makes it really interesting to work with him.”

Townsend is receptive to ideas from his coaching team, and will always test his own theories on the game in a practical way. He also seeks out inspiration from different places, including other sports, especially soccer.

The Scot has spent time with top managers Pep Guardiola and Roberto Martinez, had Gordon Strachan and Craig Brown talk to his players, and once got Alex Ferguson to record a video message ahead of a big game. He listens to podcasts to pickup tidbits on coaching and learning, all the while looking to evolve in a similar fashion to the way that he encourages his players.

On the pitch Scotland possess some influential characters, quite apart from talent, like captain John Barclay, who will miss the Ireland game through injury, number eight Ryan Wilson and scrumhalf Greig Laidlaw.

But there is one player who shared the headlines last week, alongside hat-trick try scoring wing Blair Kinghorn – he’s on the bench this weekend – and that was outhalf Finn Russell.

Excelling at the Racing 92 club in Paris, where he’s struck up a rapport with Simon Zebo, Russell has emerged as a key figure for club and country. McFarland knows the player well.

“He is what you see. He is a very relaxed person. Sometimes you get the impression that his approach is very laissez faire in attitude, but he is very competitive. Things don’t worry him and that’s his strength.”

The occasional fault-lines in Russell’s performances offer a counterpoint to his brilliance, but Townsend views his outhalf as a key conduit for the way the coach wants Scotland to play.

Less of a player

McFarland said: “I think Gregor deals with that very well. There are a lot of coaches that would simply look at some of the things Finn did and lose the plot over it. What would then happen is that Finn would become less of a player. [In that scenario] he’s not doing the things that he does that win games for you.

“Finn is always learning about the balance of what can and can’t be done, what’s effective in each situation.  Gregor deals with him really well; he doesn’t stifle him but helps him learn.”

Maybe he recognises a kindred spirit from his days as a player, but Townsend the coach isn’t blinded by nostalgia.

It is perhaps that no one other than those inside the camp can see the wires that he has attached to the players during what others perceive as Scottish rugby’s thrill-a-minute high-wire act; perception slightly at odds with the practicality.