Matt Williams: Scotland will test the mental strength of a wounded team 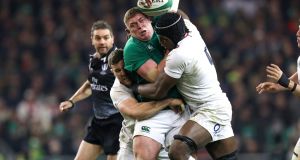 Ireland’s Tadhg Furlong with England’s Maro Itoje and Mark Wilson at the Aviva Stadium. England came to Dublin to prove themselves, and to regain respect. Now Ireland have to go to Edinburgh and do the same. Photograph: Billy Stickland/Inpho

If we cast our minds back to the unbridled Irish joy of St Patrick’s Day 2018, I am sure we can now all relate to the feelings of the English supporters who sat in the biting cold and watched the Irish Tricolours being joyously waved during post-match celebrations.

Fast forward to last weekend and, as the saying goes, “what goes around comes around”. England triumphed, and the English supporters, along with that horrid chariot, rightly celebrated. Cold humble pie was served in very large slices.

Eddie Jones toiled through many a long night to create a game plan that would render the perceived Irish strengths utterly helpless.

To the trained eye the elements to nullify the Irish game have been there to observe for some time, but no team has been good enough to put the plan into practice.

Last June the Wallabies were the first to kick long and keep the ball in play, so denying Ireland attacking line-outs. Kicking long forces Ireland to kick out or run back at you. They are not good at either.

England added to this formula with Owen Farrell targeting the diminutive Keith Earls with pinpoint cross-field drop punts, with the perfect hang time so the chasing English line arrived and contested with determination, energy and aggression.

The old story. How do you stop a rushing defensive line? Turn it around. Kick over it and chase like hounds. England did this, and Ireland did not like it one bit.

The English also recognised that the Irish forward running off Conor Murray’s passes must be stopped behind the gain line. This is easy to say but the Wallabies, New Zealand and all the Six Nations team in 2018 failed to stop Ireland’s big runner, but England succeeded. They dominated the Irish forwards in a fashion I have not seen for a long time.

The fact that both Jonny Sexton and Connor Murray had off days tells you that the Irish pack was bullied.

Halves play well when their forwards are crossing the gain line, but Murray, who is the best box kicker in the world, kicked poorly.

And Sexton, as has been the Irish game plan for some time, did not kick to exit his half – he ran the ball. Jones picked up Sexton’s desire to run and not kick. So Ireland were stuck in their half for 63 per cent of the game, and only entered the English 22 for 11 per cent of the game. Terrible statistics.

With their big runners going backwards and their halves either not kicking or kicking poorly, Ireland’s “go forward” was going nowhere because Jones comprehended another major factor in the Irish game plan – in attack Ireland do not have a “plan B”.

If the Irish forwards don’t get across the gain line Ireland seems incapable of chasing a game when behind. Joe Schmidt’s team have not lost many games of late because they start games well, dominate the “corridor of power”, and get points on the board. They then “suffocate the opposition” with a grinding attacking system.

In 2017 at Murrayfield, Ireland started poorly and lost. Last week against England we saw that the Irish attack is not designed to chase down a lead.

Jones and his staff came up with a simple game plan, and the English players implemented it with passion, enthusiasm and total commitment for the full 80 minutes. A game plan consisting of “the savage basics, done with ruthless efficiency and accurate aggression”.

England brought more passion, urgency, energy and enthusiasm to the Aviva than Ireland. I know that statement hurts, but it’s the truth.

Schmidt and his staff also had a bad week.

Picking Henshaw at full back was a gamble that did not work. Sean O’Brien, Joey Carbery and Sean Cronin should all have been brought into the game much earlier.

None of this makes Joe and the staff bad coaches. Nor does one well below par performance make Ireland a poor team. But at the top end of rugby the penthouse and the basement are frighteningly close.

What last week’s performance reminds us is that the cliché that “you are only as good as your last game” remains relevant.

What I do know is that Ireland’s mental preparation was not at its usual high standard. If you are mentally off your game, even by a very small percentage, and your opponents turn up well planned, aggressive and full of passion, you will fail.

If Ireland turn up in the same poor mental state as they did against England, Scotland will win.

Gregor Townsend will be handing out Jones’ game-plan document with the word “England” at the top of the page scratched out and “Scotland” written in.

The Scots do not have the “big boppers” to physically menace Ireland, but they can and always do cause Ireland problems, especially out wide and at the breakdown.

At its core this match will demonstrate the heart and mental strength of a wounded Irish team. Everyone has a plan until they are punched. Ireland were well and truly belted last week. We all have bad days. Ireland have had one. Now we all want to see a response.

England came to Dublin to prove themselves, and to regain respect. Now Ireland have to go to Edinburgh and do the same.

1 Wexford best the weather and Kilkenny on a mad day to be hurling
2 On healing and wild hurling: The re-education of Diarmuid Lyng
3 ‘Your father works for my father’: Schools rugby turning toxic in the stands
4 Few, if any, have given as much to Munster as Garrett Fitzgerald
5 Winning Triple Crowns: ‘Seeing Jack Kyle was a spiritual experience’
Real news has value SUBSCRIBE