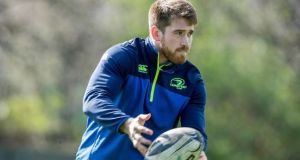 Leinster backrow Dominic Ryan will join English Premiership side Leicester Tigers ahead of the 2017/18 season.

Ryan, 27, played for Ireland against Georgia in 2014 and has also appeared for the Irish Wolfhounds.

He made 113 appearances for Leinster, and will be reunited with former coach Matt O’Connor at Welford Road.

On the signing of Ryan, O’Connor said: “Dom is an experienced professional who plays all across the back-row.

“He wins collisions on both sides of the ball, and he comes from an environment that understands the narrative of winning.”

Meanwhile Ryan, who made his first provincial appearance against Newport Gwent Dragons in 2009, said: “I have thoroughly enjoyed my time with Leinster and Irish rugby over the last seven years, but it is time for a new challenge in my career and I’m delighted to sign for Leicester Tigers, as they are one of the great clubs in European rugby.

“ I’m also excited to work with Matty [O’Connor] again because he had such a great impact on my career at Leinster.”

1 Winning Triple Crowns: ‘Seeing Jack Kyle was a spiritual experience’
2 ‘Your father works for my father’: Schools rugby turning toxic in the stands
3 Few, if any, have given as much to Munster as Garrett Fitzgerald
4 On healing and wild hurling: The re-education of Diarmuid Lyng
5 Wexford best the weather and Kilkenny on a mad day to be hurling
Real news has value SUBSCRIBE