Niall Scannell eager to grasp every opportunity in green 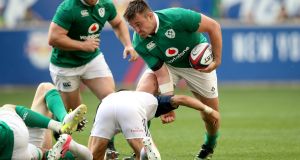 Niall Scannell in action for Ireland against the USA in New Jersey. “There’s no ‘touring’ mentality about it. We’d always go about our business.” Photograph: Ryan Byrne/Inpho

Fears about permanently stilted interactions between modern Irish internationals and reporters have been allayed. Thankfully, Niall Scannell shreds the theory about robotic adherence to the play, recover, train, play . . . the brother Rory’s debut will be marked significantly yet.

But Niall Scannell too was hidden from view, way down the pecking order of hookers in Munster – never mind Ireland – until recently.

That narrative is constantly changing; see Saturday in Harrison, New Jersey as he piloted the maul over the American try-line, or during the Six Nations when Joe Schmidt bet on this decent lump of a Cork lad rather than James Tracy. Rory Best and Sean Cronin were injured.

Already 25, the US Eagles thrashing was only his second start in a green jersey. His fifth cap in all, so far. June 10th, 2017 is a date to be marked on the Dolphin club house wall, because the little brother Rory arrived at half-time.

“Don’t think we would be put in that bracket now,” Scannell says when the Kearney and Wallace brothers are mentioned. More Wallaces than Kearneys, a hooker and 12 are comparable simply because that Garryowen clan produced three Lions – Richie in 1993, Paul famously in 1997 and David in 2009 – one a flying winger, the next a technical prop and the baby a brilliant openside.

But Scannell steers a modest course, and understandably so. Both brothers only truly established themselves in the professional game this season. And the imminent return of Cronin and Best could slow his rise, while Rory must contend with Luke Marshall on this tour and Robbie Henshaw come November.

But still. Brothers in green should feed off each other’s energy.

“I know when he’s in a bad mood anyway, I’d normally hear about it,” Scannell jokes. “Not really in a huge way. Our positions are so different we’d spend most of the day apart doing your unit stuff. All the way up people ask you about it, and we always played together with Dolphin and GAA. I’m so used to playing with him, I’d feed off him like I would any player.

“He is handy to go to around certain things, if there was a scrum in a different area it’s great to have sounding board at home where you can ask what play should be called.”

Rory Scannell will keep covering outhalf in Japan as Joe Schmidt will not be calling up Jack Carty or anyone else for the injured Joey Carbery. So, Paddy Jackson is certain to start these remaining Saturdays in June with the former Pres Cork 10 set to deputise.

“He’s developed parts of his game,” the older brother observed. “Moving from 10 in his younger years he has the distribution game and kicking game. People may have questioned his physicality at 12, but I think he has put an exclamation mark around that this year.

“That was the last part of his transition to 12; he has gotten bigger, and with Jaco [Taute] and Francis [Saili] we always had a physical midfield. Hopefully he can kick on at this level but there is such quality already there in Luke and Robbie.”

New York, now Tokyo. The craic on this tour, one could easily presume, must be flowing. Far from it. The logistics of circumnavigating the globe, and they move another 250km south on Thursday to play the first Test in Fukuroi, are ridiculous. So the five boys who won their first Ireland caps last Saturday were denied the usual ritual of a night out.

“Obviously we enjoy ourselves around certain things on tour but we know this is a huge Test – the next two weeks are going to be incredibly physical and the way Japan play, they’re so quick and they have so many variations in what they do I’m certainly treating it as a full Test game and a massive opportunity to show what I can do.

“And I think everyone would be the same. There’s no ‘touring’ mentality about it. We’d always go about our business.”

Not even a brief window to sink a few with the father on Saturday night?

“It was literally a bit of a handshake, then they were going back into the city and we stayed in New Jersey. No, it was great still for Rory on a big day like that and for my dad to get over and my sister, who is in the States for the summer, to get down for it.”

Maybe those days are over, what with the slavishly professional modern player?

“It certainly happened like that for me in Italy,” says Scannell, rubbishing this theory. “It’s just that we are under so much pressure with travel and limited training time it wasn’t really an option but it is still there in rugby, still a good tradition. Hopefully it will live on. We might get him [Rory] yet.”