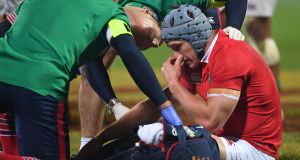 Jonathan Davies suffered a head injury during the Lions’ win over the Crusaders. Photograph: Marty Melville/Getty

Jonathan Davies must prove his fitness in training on Thursday to be able to stake a British and Irish Lions Test match claim in Saturday’s Maori clash.

Wales powerhouse Davies is the favourite to wear the Lions’ 13 shirt in the first Test against the All Blacks on June 24th.

The 29-year-old suffered a head injury in the Lions’ 12-3 Crusaders win on Saturday, however, and missed Tuesday’s 23-22 loss to the Highlanders.

Now the Lions hope the in-form Scarlets star can complete the return-to-play protocols in time for Saturday’s Maori All Blacks clash in Rotorua — where the tourists are likely to field a line-up close to their Test XV.

“Jonathan is still going through protocols but hopefully he’ll be back in training (on Thursday) and we’ll see from there,” said Lions assistant coach Neil Jenkins, who also hopes Ross Moriarty will beat a back spasm before Saturday.

“Ross has been back in training doing a little bit of running, and hopefully he’ll come through as well.”

Courtney Lawes suffered a nasty-looking head knock in Tuesday’s Highlanders loss, with Jenkins admitting the England lock is unlikely to recover in time to feature this weekend.

“Courtney’s been okay today but it’s the same as always with head injuries — the protocols and see how he goes for the rest of the week,” said Jenkins.

“He’s a tough old character, he wanted to walk off the pitch, albeit with a bit of help. But the likelihood is he will miss the weekend.”

Tour captain Sam Warburton returned from ankle trouble to start the Dunedin defeat to the Highlanders, as he steps up his bid to be ready for the three-Test All Blacks series.

The Lions have two more matches before taking on New Zealand in the series opener in Auckland, with Warburton battling against time to force his way into that starting XV.

Jenkins hailed Warburton for offering a “much, much better game” on Tuesday, however, with the Wales flanker likely to take a seat on the bench against the Maori.

“Tuesday was certainly better from Warby (Warburton), and it was nice for him to get a run-out,” said Jenkins.

“There were quite a few turnovers from him. For Sam now it’s just about keeping getting game time if he can.

“I don’t know what the outcome will be on the weekend, but it was a big improvement from him, and the more game time he plays the better he’s going to be.

“Sam’s a top-end player, a quality, world-class seven, but again it’s the same as anything, you need to be playing to keep getting yourself back up to the levels that you need to.