Late Horwitz penalty gets Connacht over the line in Galway 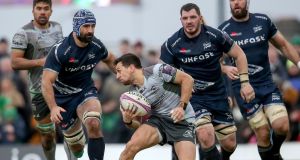 Connacht have given themselves a real chance of qualifying for the European Challenge Cup quarter-finals with a first win over English visitors Sale in the Sportsgound.

Error-strewn and imperfect, Connacht had to dig deep after Sale, having overturned a 17-7 half-time deficit, had the chance to win with only minutes remaining. However, Connacht held out to record a first victory over this English Premiership outfit, join them on top of the Pool Three table with 17 points, and have now kept themselves in contention of qualifying when they travel to Bordeaux next week

In a penalty-riddled opening half, Connacht were on the attack from the start but they were unable to capitalise on early opportunities until a penalty at scrum-time presented outhalf Jack Carty with a 25 metre kick which he converted. And in a dominant 10 minute period they continued to make it count. A superb kick from Matt Healy gave the home side territorial control before the forwards did well to force the turnover and regain possession.

Scrumhalf James Mitchell skipped Jack Carty to find Bundee Aki and after drawing the defence the Ireland international slipped the ball to midfield partner Kyle Godwin whose angled burst caught the defence cold to touch down after 20 minutes.

Carty added the conversion for a 10-0 lead and Connacht were quick to maintain the momentum - their energetic display reaping rewards when two minutes later flanker James Connolly forced a turnover in midfield. Scrumhalf James Mitchell was able to hack the ball downfield, secure possession and race over for try number two.

Carty’s conversion put the home side into a 17-0 lead and they should have been able to keep the visitors scoreless at the break. But Sale snuck in for a soft try right on the whistle, and it was that man Chris Ashton who profited. From a late penalty to touch inside their own half, Sale opted to go wide and although Denny Solomona looked to have put a foot on the line when juggling possession, he was able to break up the right and offload to the supporting Ashton. Playing at fullback, Ashton escaped an attempted tackle from Mitchell to add to the three tries he scored against Connacht in round two.

Influential scrumhalf Faf De Klerk had the opportunity to close the gap further immediately after the break, but his penalty from just inside half way was inches wide. However, the visitors continued to control the game courtesy of a series of penalties and, but for a forward pass, Strauss could have bagged number two as the visitors upped their physicality. It was not long, though, before the Sale fans were celebrating their second, this time scored by De Klerk who finished off a break from captain Jono Ross after 49 minutes.

Temperatures increased when Carty was tackled late - unseen by the touch judges - but a high tackle on replacement Caolan Blade produced a three-point opportunity for Connacht just outside the 22, but Carty scuffed his kick low and wide. At the other end De Klerk kicked two in quick succession to put Sale in front for the first time.

Connacht, however, were able to capitalise on an overcooked kick from Sale, and from a resulting maul penalty, the pack looked to have finally claimed a winning try, which was unseen by the French referee. They would retake the lead when replacement outhalf David Horwitz struck a penalty with eight minutes remaining.

Sale staged a last stand and as the clock ticked into the red they were given the chance to kick themselves in front with a penalty. Instead they opted for touch. Second row Ostrikov secured possession, but in a dramatic endgame Sale were penalised for crossing in the maul. It ensured Horwitz could send the ball to touch giving the 6,229 fans the chance to celebrate a first win over Steve Diamond’s side.