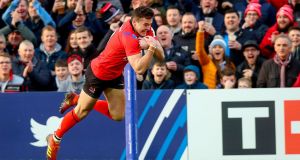 Equally awful collective performances are overshadowed by the magnificence of Jacob Stockdale. For all the problems Dan McFarland must solve in Belfast, the sight of this giant local lad bounding into training every morning must feed the hope of a return to the glory days of 1999.

Gloucester’s beaten down think-tank of David Humphreys and Johnny Bell temporarily returned home to be paraded alongside their fellow European champion teammates before kick-off (Humphreys skipped the on-field waving ceremony).

Judging by the error count - particularly by those charged with sticking the ball between posts - neither team seemed overly interested in winning (of course, all Stockdale does is win).

Racing were particularly misguided with Finn Russell offering a shambolic display from outhalf, one superb pass aside, forcing Teddy Iribaren to eventually take the kicking tee.

As it currently stands, the French still top Pool 4 with three points to spare on Ulster.

The hosts initial energy levels looked capable of taking the spoils with something to spare, and putting one boot in the quarter-finals, but they stalled after Stockdale’s typically ruthless try put them 13 points clear.

Simon Zebo was man marking Ireland’s superstar wing - a title he coveted once upon a time - but was not at fault for the slick finish on 13 minutes.

As Racing’s meaty frames pounded into the Ulster 22, they were interrupted by an all too rare glimpse of Marcell Coetzee’s true value. A turnover by this one-time Springbok suddenly flipped play down field with Addison expertly straightening the attack as Louis Ludik linked the chain to Stockdale. The 22-year-old had some ground to cover but Antoine Claassen, another discarded South African backrow, was shrugged off like a child.

The two Racing ripostes before half-time were down to soft Ulster defence and little more. Granted, Vakatawa takes some stopping but Burns, Stuart McCloskey and Ludik failed to break the French centre’s stride.

Addison really looks a class apart. Injury to Burns saw him take over kicking duties with a penalty after Stockdale was, uncharacteristically, unable to dot down a lovely grubber by the latest gift to Irish rugby from England.

John Cooney was pulled during the warm-up with back spasms - every loss of a frontliner seems like a mini-crisis for this Ulster squad littered with functional players.

The 16-5 lead seemed about right until Ulster were undone by more Vakatawa brilliance as a power fend on Jordi Murphy and basketball offload allowed Zebo to squeeze over.

Zebo and his strapped leg did not reappear after the interval.

The next Stockdale intervention was outrageous. Similar to the try he scored against England on St Patrick’s Day, but better, because Olivier Klemenczak had a hold of him inside the Ulster half. Having wriggled free, three more men blocked his bath to the line. The chip bounced in field and bamboozled them all. Wonderful.

Ulster were anything but when it came to seeing out the win from their 23-10 perch.

First, Bruce Dulin raced over and then Olivier Klemenczak snatched a bonus point clinching try, both in the right corner, with Iribaren’s conversion, after Russell was yanked off, reducing arrears to two points with 15 minutes remaining.

This victory should never have come with a nail-biting finale but that’s the state of Ulster in 2019.

Jordi Murphy was lured from Leinster for moments like these. As Racing came hunting a winning score the openside performed a textbook turnover.

That seemed to be that. Not a chance. From the resulting lineout Murphy fumbled Rob Herring’s throw - Best hadn’t been much better - and Racing took off with Juan Imoff finishing off a try that will never be as Virmiri’s assist was forward.

Ulster stumble onwards, needing a win in Leicester next Saturday to reach the knock-out stages.

There are no guarantees but plenty of scope for improvement. They need to find a new outhalf. Michael Lowry finished this contest at pivot.