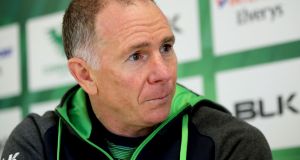 Irish internationals Ultan Dillane and Dave Heffernan have both been included in Connacht’s squad to face the Southern Kings on Sunday in Port Elizabeth (kick-off: 1pm Irish time).

The pair were both released from the Ireland camp following the postponement of the Six Nations tie with Italy, and duly met up with the squad for the one-match trip to South Africa.

Dillane starts in the secondrow alongside Joe Maksymiw with Heffernan named among the replacements.

In all there are six changes from the side that lost to Edinburgh last weekend. Paddy McAllister is drafted back into the frontrow alongside Shane Delahunt, while there’s also a start for prop Dominic Robertson-McCoy following an ankle injury to Finlay Bealham.

The backrow is unchanged for the third consecutive game with Jarrad Butler captaining the side at number eight, with flankers Paul Boyle and Colby Fainga’a alongside him.

Caolin Blade comes back into the starting side to partner Jack Carty in the halfback positions, while there’s also a change at centre where Tom Daly is named alongside Kyle Godwin.

The final switch comes on the wing where Connacht’s record try-scorer Matt Healy makes up a back three with John Porch and Tiernan O’Halloran.

Head coach Andy Friend says everyone is keen to put the disappointment of last weekend behind them: “we didn’t get the result we wanted in Edinburgh, so this week has been all about ensuring we get another win on the board. The Kings are a dangerous side especially at home so we will have to be at our very best.

“We’ve been able to call on two international footballers in Dave and Ultan which is a nice boost for us. This mini-block of three games is key for us so I believe we have named a squad that can get the job done on Sunday and finish on a high before the short break.”