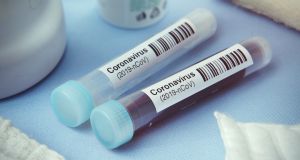 ‘Anyone who has been to the affected regions in northern Italy in the last 14 days and has a cough, shortness of breath, breathing difficulties or fever should self-isolate and phone their GP immediately.’

The St Patrick’s Day festival and other public events may face restrictions as a result of public health measures likely to force postponement of the Ireland-Italy rugby international next month.

The measures, introduced to counter the rising threat posed by the worldwide coronavirus outbreak, are likely to mean restrictions on people travelling from the most affected regions to events in Ireland.

With 2,500 Italian rugby fans due to travel in Dublin, the match scheduled to take place on March 7th was viewed as particularly high risk given outbreaks of the disease across northern Italy in recent days.

“No one wants to see mass events cancelled, but at the end of the day we have to prioritise public health. We’re in a containment state, it’s not possible to stop every case but we need to take all reasonable measures,” said Minister for Health Simon Harris on Tuesday evening, shortly after announcing his officials’ recommendation that the rugby international be postponed.

However, the Irish Rugby Football Union declined to accede to the recommendation last night, saying it first wanted an urgent meeting with Mr Harris “as to the specific reasoning for the cancellation”.

While Mr Harris said “no definitive viewpoint” had been reached by the National Public Health Emergency Team * on other mass gatherings, officials plan to liaise with the organisers of larger events in the coming days, he said. An expert group is to be set up to risk assess events on public health grounds, based on internationally-accepted criteria.

The decision on the rugby international was based on the “rapidly evolving nature of the outbreak in northern Italy, and the consequent risk of importation of cases into Ireland, were the match to go ahead”, said Dr Tony Holohan, chief medical officer in the Department of Health.

Italy has reported more than 300 cases of coronavirus and 11 deaths in the northern part of the country in recent days. The virus has also been exported from Italy to neighbouring countries and to Spain.

The Department of Foreign Affairs is to update its travel advice following the emergency team meeting on Tuesday. Whereas existing advice on travel to affected areas had been confined to China, this will now extend to Japan, Hong Kong, Iran, South Korea and the four regions of Italy that are the subject of restrictions imposed by the Italian authorities.

Amid rising public concern over travel to Italy, particularly in relation to school ski groups that have returned recently from the north of the country, Mr Harris emphasised that there is no “blanket requirement” on people who are well and have returned from affected areas to self-isolate.

What are the symptoms?

“Anyone who has been to the affected regions in northern Italy – Lombardy, Veneto, Emilia-Romagna and Piedmont – in the last 14 days and has a cough, shortness of breath, breathing difficulties or fever should self-isolate and phone their GP immediately.

“Anyone who has travelled from the affected regions in northern Italy and has no symptoms should visit hse.ie for advice.”

A number of Irish citizens in Tenerife have contacted the Department of Foreign Affairs after a hotel on the island was placed under quarantine when an Italian doctor staying there tested positive for the virus.

Restrictions are in place at the H10 Adeje Palace hotel, with some 1,000 tourists staying at the complex not allowed to leave. The department said it is providing consular assistance. It said the Irish Embassy in Madrid is “closely monitoring the situation” and is in touch with the local health and tourist authorities.