Farrell opts for sweeping changes in side to face Wales

Head coach Andy Farrell says he is looking to James Lowe, who has qualified to play for Ireland on the three-year residency rule, to bring an "extra dimension" to his side's play ahead of the Leinster winger's international debut. Video: VOTN 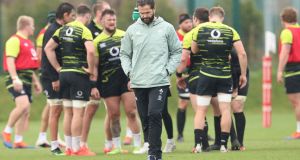 Andy Farrell: “Obviously I watch all the games. I analyse all the games and you pick a squad, not just from their provincial form. You pick a squad from who can and who can’t play at international level.” Photograph: Billy Stickland/Inpho

One of the most striking aspects of an exciting-looking, redesigned Irish starting XV to face Wales in Friday’s Autumn Nations Cup opener at the Aviva Stadium (kick-off 7pm) is that it features 11 Leinster players.

Time was when Irish coaches could be a bit sensitive to the provincial make-up of their selections. A headline in a northern newspaper which read Ulster Says No when none of their players made one Irish starting team springs to mind, with said reporter beckoned to explain a heading over which he had no control. He survived and is still going strong.

But in shaking up the Irish team – there are seven changes in personnel and three positional switches compared to the run-on side in Paris – Andy Farrell was not even aware of its blue-tinged tone.

“It’s honestly the first time I’ve heard that. It’s not even registered with me or Mike [Catt]. I’ve got to do what’s right for the squad and I see this squad performing at the weekend and developing in the future as well. It’s not something that comes into my mind at all.”

Given how Leinster have lorded it over their provincial rivals and everyone else in the Pro14 amid their run of 24 consecutive wins, the selection certainly isn’t flying in the face of form, albeit something’s not right in the world with just one Munster forward in the match-day squad.

“Obviously I watch all the games. I analyse all the games and you pick a squad, not just from their provincial form. You pick a squad from who can and who can’t play at international level, from who can cope with the difference of having 10 days to get across all sorts of new ways of playing, new calls et cetera and still have the composure to go out there and play at the weekend.”

“Some top-level Pro14 players can’t do that and some can. There’s a big difference in some of the Pro14 games in comparison to the pressure they’re under internationally. The make-up of the week is different so you’re always trying to find out about the character of the player, not just how talented he is.”

No less than the debutant James Lowe, the fit-again Rónan Kelleher, Iain Henderson (returning from suspension) and the recalled Josh van der Flier, as well as the trio promoted from the bench, Chris Farrell, Jamison Gibson-Park in his first Test start and Peter O’Mahony, should all be coiled like sprinters at the starting blocks.

Ditto another prospective debutant among the replacements, Billy Burns, and the restored Keith Earls, who has been restricted to just two appearances off the bench since the World Cup. Earls needs one more try to overtake Tommy Bowe and become Ireland’s second-highest Test try scorer of all-time behind you-know-who.

There is no hard and fast rule about using all of the 34-man squad, but Farrell expects to do so, and some.

“Do you know what? We might use more. We could use more. But, having conversations with lads last night and this morning regarding selection today – we’re not promising anything for next week neither.

“Each game takes its own course. You go into the Georgia game and you don’t know who we’ll play in the last round. But you would think over a period of six international games you’d certainly get through more than 34.”

This one-off tournament might also offer scope for Ireland to broaden their game and, say, develop their ability to play out of the tackle (a skill Lowe’s presence should enhance) bearing in mind that 14-2 offloads’ tally against France.

“If you look back to the Italy game, everyone talked about us offloading the ball. But it’s doing it at the right time which I thought we did pretty well two games ago,” countered Farrell.

“The reason France were able to offload the ball more than us in Paris is simply because we made too many errors and we invited them to express themselves. You tend to play a bit more unstructured on turnover ball, so hopefully our defence can do that for us at the weekend and we’ll see how that brings.”