Beating Wales was a tonic for the troops, but the big battles lie ahead 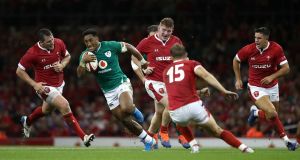 Ireland centre Bundee Aki makes a break during the International match between Wales and Ireland at Principality Stadium in Cardiff on Saturday. Photograph: Stu Forster/Getty Images

This was far from perfect, but Ireland at least produced a reaction and generated a feel-better factor, if not entirely feel-good, within the squad.

The restorative win has to be put into context. A Wales B/C side is not exactly England at full-strength. What’s more, the win was founded in large part on the kind of scrum dominance against a Welsh pack featuring a debutant 21-year-old loosehead that will hardly be repeated on September 22nd in the World Cup pool opener against Scotland, and certainly not in a prospective quarter-final.

Ultimately, the scrum contributed to a raft of penalties, including the opening three points and the decisive penalty try, as well as a yellow card for the Welsh reserve tighthead Leon Brown.

Next Saturday at the Aviva will be full-on and altogether different, but in the meantime pretty much all those who had a case for inclusion in the 31-man squad did so.

Will Addison, whose excellent high take was the starting point for Ireland’s first try, was assured at the back and his versatility is firmly back in the mix. Jack Carty, the outstanding David Kilcoyne, Andrew Porter off the bench and Jack Conan all assuredly sealed their places. Conan did not make the dramatic carrying impact that he might have hoped, but his work in defence and at the breakdown was strong.

There was the choke tackle turnover on Jarrod Evans in tandem with James Ryan, whose presence ramped up Ireland’s line speed in defence. Conan was first to secure the ruck ball from Kilcoyne’s break, which was also a major component part of that first try, and he was running as strongly as anyone in the last quarter of a full 80-minute performance.

“I probably would have liked to carry a bit more but I thought, across the pack, there weren’t huge numbers,” he said. “Obviously, Killer [Kilcoyne] had a fantastic 45 minutes before he came off and he dominated the carrying stats but, other than that, I think everyone was pretty low across the board. I don’t think I’m the outlier in the sense that I didn’t carry as much as I would have liked. That was the way the game went.”

Conway, full of work rate off the ball and on it, was the creator-in-chief of the first try. Whether he, Chris Farrell and Tadhg Beirne have done enough, time will tell.

It was striking that the quartet retained from last week’s demoralising defeat in Twickenham all had big games. Bundee Aki was like a man on a mission, always threatening whenever he exploded onto the ball, and again pushing up quickly, but this time with more measured intent in the tackle. He and the explosive Kilcoyne did as much as anyone to create the go-forward ball with which Carty attacked the gain line.

With a different number on his back, Peter O’Mahony was reborn. In one three-minute spell he made a trademark jackal over the ball to earn a penalty, reclaimed loose turnover ball on the deck and transferred a daring break-out with a long right-to-left skip pass.

Perhaps partly due to the galvanising presence of James Ryan, showing not a hint of rust in sparking much of Ireland’s improved line speed in defence, Iain Henderson was industry personified and Ireland’s leading tackler.

From the moment the fourth starter retained from last week, Jacob Stockdale, ran in the first of his two tries, the new found intent was imbued with a little bit more confidence. His first try was a routine run-in by dint of holding his width and tracking Conway’s break before accepting the try-scoring pass after Kilcoyne’s huge break, and Carty attacking the gain line and freeing his hands to link with Conway’s trailer inside.

It was actually Stockdale’s first try since scoring for Ireland against Italy in Rome last February, thus ending a seven-game run without a try. The second was more the result of Ireland’s improved line speed, communication and sheer desire, as Aaron Shingler’s one-handed offload when tackled by Farrell fell behind Owen Lane.

Stockdale, sniffing his chance like few others can, was first to the ball, poking it upfield. The way it bounced kindly for him yet again made you wonder if he practices this as well as his back-spinning chips. He gathered and fended off Hallam Amos for his 16th try in 21 tests. All was a little better in his world.

“It was definitely a case that we let ourselves down as much as anything last week and we let an awful lot of other people down. We just wanted to make sure that we changed that,” said Stockdale. “It didn’t all go right out there, but I thought we came out for the first-half and played really well. There was a good energy, a good bounce about us that we haven’t seen for a while. We’re definitely back on the right track.”

Save for the front-row replacements, the bench did not make a particularly big impact. Admittedly, the tide turning red probably had something to do with the Welsh substitutes, Rhys Patchell especially, as well as the flow of penalties from Romain Poite and, it has to be said, a typically heady brew of Welsh defiance and fitness.

Nonetheless, Porter made a convincing case for his ability to cover his initial position of loosehead, while it wasn’t just the four surviving starters from last week who were intent on making a point. Rory Best threw himself into collisions with abandon, making his tackles and those of others. In his 28 minutes on the pitch, Best was Ireland’s second-highest tackler over the 80 with a dozen. Only the industrious Henderson (14) had more.