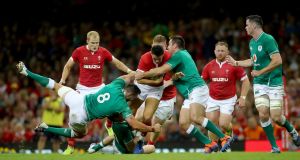 Ireland had just beaten Wales in Cardiff for the first time in four years but in many respects it didn’t feel like it. A somewhat woebegone Joe Schmidt was less than thrilled by the prospect of revisiting the worst days of his coaching career four years ago, namely finalising the 31-man World Cup squad, while the players on duty in the Principality Stadium contained a mixture of nailed-on certainties, as well as probables and possibles.

That will make for an anxious 48 hours or so. The coaches met on Sunday and are due to meet again this morning before Schmidt contacts those 10 players in the existing 41-man squad who won’t make the cut. The 31-man squad will be submitted to World Rugby on Monday but unlike almost all others, the names won’t be announced until next Sunday, the day after the final warm-up game at home to Wales on Saturday.

“Yeah, it’s tough,” admitted Jack Conan after Saturday’s 22-17 win over the Welsh. “Only 31 lads get to go and represent Ireland and to go on next week in the more immediate future, to play Wales next week. So look, first it’s good to right the wrong of last week and get back to winning ways, to come over here and win in the Principality for the first time in a long time.”

“So that was nice to mark the occasion, but it’s going to be squeaky bum time over the next 24 hours, waiting for phone calls or not,” added Conan. “I don’t know whether that will be a good or a bad thing!”

Schmidt himself was dreading the prospect of informing those players who won’t be chosen.

“It just depends how soon I can track them down and make the calls and if I can catch up with them face to face, that would be great, and, if not, just to make the phone calls.

“The thing is I know what’s going to happen, we’re going to go into a room and come up with 22 or 24 or 25 names and then we’re going to go, ‘oh okay is it this or this or this guy?’ And that’s the really tricky bit, those last few names that are most complicated and they’re the finest lines to make decisions when there’s not too much between the players.

The Irish head coach admitted that, in hindsight, they may not have struck the right balance four years ago.

“Yeah, it’s probably one or two positions in retrospect, just the way the whole tournament panned out for us, it would have been better if we’d picked this guy and not that guy.”

Warren Gatland had become a little emotional before and after the final home game of his 12-year reign, a level of durability that Schmidt admired and respected.

“He’s done a super job. I think they’ve won four championships, he’s got those Grand Slams and at least he can leave and he’s left a legacy that he can be really comfortable with, I’m sure. He might be leaving this place but he’s got a game next week that he will go after for sure and he’s got a World Cup he’s going after.

“To be honest, I won’t be too emotional,” Schmidt maintained. “I’ll be bedraggled after making those phone calls and a little bit dazed and confused probably, to be honest.

“It’s been a really tough three or four weeks for me, emotionally, anyway, so it’s not like, you know, it puts things into perspective,” added Schmidt in reference to the family bereavement which forced his return to New Zealand prior to the opening warm-up game against Italy.

As to whether he’ll be able to enjoy his last home game as Irish coach, Schmidt said: “I enjoy coaching. That’s the bit I love. I get out on the pitch, I can really enjoy dialling in and trying to help players and keep them under pressure and that’s the bit that almost, you know, match days, it’s a pressure cooker, to be honest.”

“I won’t miss match days, except there have been some pretty special matches that have been unbelievable and I’ll miss those precious moments post-match and just before the end of the match when you know you’ve actually tied something up that’s pretty special.

“I’ll miss the people I’ve worked with, massively, because I think they are just, you know, sometimes we get criticised because we might not be the flashiest crew in town but as far applying themselves and working hard and being good men, I really enjoy the people I work with.”