World Cup history and versatility point to gamble on Carbery 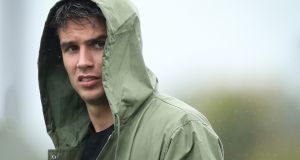 Joey Carbery: he had been earmarked for this World Cup in part because he also covered full-back and at a push the role of third choice scrum-half

Nobody died, but it sure as hell felt like someone had. Everyone being dressed in black maybe added to the funereal atmosphere. The news had broken earlier that day. Dan Carter was out of the 2011 World Cup in his native New Zealand.

He was to have captained the All Blacks for the first time in their pool finale that Sunday, August 2nd, against Canada in Wellington, but the lead item on television and news throughout the country was that Carter had torn his abductor while doing what he had done before every game for a decade or more, practising his goal-kicking.

Graham Henry described the news as “devastating”. Sitting in a packed but hushed café in Dunedin, where Ireland were to beat Italy 36-6 later on that fateful final Sunday of pool matches, it’s not stretching things to say that much of New Zealand genuinely seemed to be in mourning.

The inexperienced Colin Slade, then aged 23, was chosen as Carter’s understudy

It certainly seemed particularly cruel that Carter, probably the best out-half of all time, was being denied the leading role in ending New Zealand’s 24 years of hurt on home soil while at the peak of his powers. He was 29 at the time, and would be World Player of the Year a second time in steering the All Blacks to another all-conquering year in 2012.

Furthermore, Henry and Co hadn’t really explored contingency plans. It’s hard not to keep turning to the best out-half in the world when he’s healthy and well.

In the All Blacks’ 48 games between the 2007 and 2011 World Cups, Carter played in 39 of them, all but three as the starting out-half. They won 34 of those 39 games. In the nine games without him they won five and lost four.

Nick Evans and Luke McAllister had decamped to Harlequins and Toulouse, and come the World Cup Henry and Co had abandoned their investment in Stephen Donald. He had played in 22 tests before incurring the wrath of the New Zealand public once too often with a costly cameo in a defeat against the Wallabies in Hong Kong.

Instead the inexperienced Colin Slade, then aged 23, was chosen as Carter’s understudy, having started just two of his five tests before the tournament.

When Slade suffered a torn groin in the 33rd minute of the quarter-final he was replaced by 22-year-old Aaron Cruden, who had started just one of his six tests. When Cruden went off in the 33rd minute of the final against France with a knee injury, he was replaced by Donald, who had received an SOS while on a fishing trip after Slade’s tournament was ended.

Donald kicked the winning penalty against France, even if some maintained it had shaved the outside of the upright, in his last cap for the All Blacks.  By hook or by crook they got there in the end.

But if the All Blacks got lucky in 2011, they didn’t in 2007 when Carter limped off in the 56th minute of the quarter-final against France, to be followed by his replacement Evans 10 minutes from time. And even with McAlister moving from centre to out-half, the red-hot favourites lost 20-18.

Similarly, Carter had started 27 of 35 tests leading into the tournament, Evans five and McAlister just three at out-half.

Those two examples apart, the ultimate World Cup winners usually had the best ‘10’, and indeed best ‘9’, in the world. And, unlike Carter until 2015, they stayed injury free.

In the inaugural 1987 tournament, All Black David Kirk (captain and five tries) and Grant Fox (126 points in seven matches, including 17 in the final against France) were the leading half-back combination in the game.

Four years on and Nick Farr-Jones was replicating Kirk’s role as scrum-half and captain of the 1991 World Cup-winning Wallabies, with Michael Lynagh then a young prince among out-halves.

As an extension of his versatility, Carbery also has one other string to his bow. He could play in tandem with Sexton as a second playmaker

In 1995 it was Joost can der Westhuizen and Joel Stransky; in 1999 George Gregan and Stephen Larkham were pre-eminent, and four years on it was Matt Dawson and Jonny Wilkinson.  Four years ago Carter finally had his just desserts when guiding the All Blacks to their retention of the William Webb Ellis trophy outside Aaron Smith.

The pattern is hardly surprising.

Four years on Johnny Sexton goes into this World Cup as the reigning World Player of the Year, and such was his form in 2018 that you could have made a case for Conor Murray as well.

They certainly have some body of work behind them in this latest World Cup cycle, what with wins over the All Blacks with both Ireland and the Lions, as well as South Africa and Australia, and a Grand Slam. Meantime, the Smith-Barrett combination has been broken up.

Murray and Sexton have also started 54 tests together. True, their form didn’t scale the heights of 2018 in this year’s Six Nations, but in all other respects they could hardly be much better primed for a tilt at the World Cup.

Invariably, the first choice halves will have started the bulk of matches in a given World Cup cycle, and there is a drop in quality and certainly experience when delving into the reserves. That’s not unique to Ireland.

Carbery had been earmarked for this World Cup in part because he also covered full-back and, at a push, the role of third choice scrum-half.

Nonetheless, Carbery’s hopes of making the cut haven’t been helped by his latest setback, but with Paddy Jackson out of the picture since his last cap against Japan in Tokyo two summers ago, Ireland’s next two out-halves have, until today, yet to start a test between them. And as Schmidt conceded, like Sexton, they are “locked in” as ‘10s’.

However at least one, if not both, of Jack Carty and Ross Byrne look sure to go, and listening to Schmidt and Richie Murphy this week it really does seem to hinge on the next two weeks, and particularly today against England.

Word is Byrne has been going well in training. He brings a calmness to his work, organises his teams well, carries out a game plan and has, perhaps, more orthodox strengths.

Not that Carty doesn’t bring plenty of the above too, and he is quicker and more capable of seeing and finding space. But neither has much experience at test level.

As an extension of his versatility, Carbery also has one other string to his bow. He could play in tandem with Sexton as a second playmaker.

Historically it’s a ploy that the Wallabies have always favoured. It worked for the Lions when Sexton started the second and third tests inside Owen Farrell.

Eddie Jones is reprising the Grand Slam-winning George Ford-Farrell axis with England today, while Steve Hansen and Ian Foster have gone further.  Damien McKenzie was identified as the alternate playmaker from ‘15’ on their end-of-year tour, but was cruelly ruled out of the World Cup earlier this year.

Another Barrett off-day with the ‘t’ in the home draw with South Africa has seemingly steered the All Blacks think tank toward using Barrett’s skills from ‘15’ and giving the ‘10’ jersey to Richie Mo’unga, the more dependable place kicker.

When asking Schmidt if playing Sexton and Carbery in tandem, if only in an endgame, was still a viable option for Ireland, the head coach said: “We actually feel that a couple of guys do it for us. I think Garry Ringrose is a guy who can play at first receiver. He’s played a bit there at school, so it’s not that far outside his ability scope, and he’s such a measured kid that he doesn’t get ruffled. So I think he can do it.

“You’re dead right, Joey playing at ‘15’ and then a double sided ‘10’, is a nice thing to be able to do. I think that’s why Fozzie [Ian Foster] and Steve [Hansen] were disappointed to lose Damian McKenzie. He played the season for the Chiefs at ‘10’ and him stepping up from ‘15’, especially with the athleticism he’s got……I think that’s part of the formula now why they’ve gone with Richie Mo’unga, and Beauden Barrett shifting back to full-back, but it may not have worked out like that if Damian McKenzie had been available.

“We’re in a similar situation. Is Joey available or not? We’re waiting just like you guys, really. We’re going to wait and see how he goes.”

To date all six of Carbery’s test starts have been at ‘10’, and off the bench he has only played 112 minutes at full-back, against Australia in 2016, USA in November 2018 and England last March.

What’s more, only the last eight minutes against England in February were in tandem with Sexton.  It hasn’t been explored, but it would be another arrow in Ireland’s quiver, and in the absence of Simon Zebo, there’s no one other than Carbery who ticks that box.

In the heel of the hunt Ireland need Murray and Sexton to stay healthy and play well. Same as it ever was.

They clearly need one of Carty and Byrne as well, as one or other could, at the very least, be on the bench against Scotland in the World Cup pool-opener.

But for a variety of reasons gambling on Carbery’s well-being, all the more so after the investment of the past three years, is a punt worth taking.

1 My favourite sporting moment: Roscommon minors restore pride to a county
2 Premier League players launch charitable fund to help NHS
3 America at Large: Hurling fan Dowling leading the fight against Covid-19
4 Harry McNulty: Seeing the world, from Sevens to dog-sledding
5 Pro14 nations could miss out on €15m in TV revenue if league is not completed
Real news has value SUBSCRIBE