Leinster flanker (24) hasn’t played since December, but could be deployed against Wales 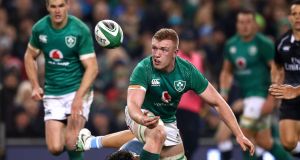 Ireland’s Dan Leavy in action against Argentina in the Guinness Series at the Aviva Stadium on November 2018. Photograph: James Crombie/Inpho

Dan Leavy is seemingly in strong contention for a somewhat surprising recall to the Irish line-up for Saturday’s Guinness Six Nations finale against Grand Slam-seeking Wales at the Principality Stadium (kick-off 2.45pm).

The Leinster flanker, an ever-present in Ireland’s Grand Slam last year, won the last of his 11 caps, against Argentina, last November and hasn’t played since Leinster’s win over Connacht at the RDS on December 22nd.

The 24-year-old had been selected to start against the All Blacks, but was replaced by Josh van der Flier after suffering what was described as “general tightness”, subsequently amended to a “neck strain” the following week. Leavy then suffered a calf injury in training in January.

In the musical chairs at openside since November, Seán O’Brien was also ruled out of the All Blacks game with the broken arm he sustained against Argentina, when replaced by Leavy, and, after being recalled for the games against England, Scotland and Italy, was omitted for last Sunday’s win over France.

Van der Flier started in his stead, but on Tuesday he was ruled out of the Welsh encounter with the groin strain which forced him off in the 24th minute last Sunday. With Joey Carbery due to return to training Tuesday afternoon, Ross Byrne returned to the Leinster squad and, perhaps significantly, Leavy’s inclusion is the only other change.

Leavy was the first player Joe Schmidt namechecked in the aftermath of Sunday’s win when discussing his options this week. Asked what they’ve missed in Leavy’s absence, scrum coach Greg Feek gave the broadest of hints that the backrower’s X-factor might be called upon.

“No disrespect to who’s been playing in that position while he’s been away, it’s a difficult one to answer because you respect what Seánie and Josh have done. Dan obviously brings a similar approach to those guys: he’s mobile, he’s physical over the ball, he’s a bit of a pest when he plays,” said Feek.

“Each guy has his strengths and with Dan he certainly does have them, and I feel for him a bit, he’s been frustrated getting over a little niggle and sometimes getting that right was his priority. But he’s got some X-factor there that would be handy to have.”

The one caveat is clearly that Leavy hasn’t played in 11 weeks, and Feek accepted “there’s always an element of risk” in recalling players after a lengthy absence.

“So it’s a tough one, because you get confidence out of our systems we have around physical fitness and coming back from injuries and that. I do think he’s close, so it’d be a tight call.”

Ironically, Feek echoed Joe Schmidt’s view that O’Brien has suffered for a lack of game time, even though he has played four games since recovering from his broken arm.

“He’s probably just a fraction off where he’d like to be, and the problem is he sets such a high bar in terms of what he has done that he’s probably expecting a bit more. But I don’t think he’s been too bad.”

In what will assuredly be a continuing source of surprise for Irish supporters, especially Munster ones, the indications are that Tadhg Beirne will miss out again, which might also be welcomed by former Scarlets team-mates and fans.

Beirne has only played one game since injuring his knee late on in Munster’s win over Exeter eight weeks ago; asked what he would need to add to his game to be ready for that step-up from provincial to test level, Feek said: “There’s that physical side of things. For a big man like him, he hasn’t played a hell of a lot. Getting through some work, getting through some trainings, getting through the high-intensity trainings and seeing how he comes through that.

“These decisions aren’t made lightly and, yes, his form has been really good, like top form when he’s played for Munster, particularly this year. He played some cracking games but we have to make sure, going back to the Seán O’Brien thing, that we feel like they’re ready and we’re giving them justice when they do get an opportunity, not just throwing them out there and going: ‘Ok, he’s played well, let’s go.’ If he was carrying something, you want to make sure that that’s all clear, that he gets a good hit under his belt and then he can perform at the level required.”

Noting the scientific data provided by their GPS system, and the input of S&C coach Jason Cowan and their medical staff, Feek added: “All the guys are pushed really hard to make sure that we train as we play. That’s really important to prepare yourself for a Test match, and I think for Tadhg that’s been a good lesson.”

As for his own domain, and the “frustrating” loss of a five-metre scrum against France when the ball popped out through the channel and should have been re-set, Feek admitted “we just didn’t quite get the put-in right”, and similarly when penalised at the game’s last scrum.

“They’ve been going pretty good. They got a tight-head on the England ball a few weeks ago, they put a lot of pressure on Scotland and there’s a lot of continuity in their selections, a lot of combinations, they’ve kind of got a good feel for each other. So I think it will be a good contest, yeah.”