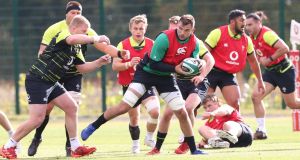 Tadhg Beirne in Ireland training: ‘Back in February I’m shouting for Ireland from my sofa, probably still on crutches, got a boot on and then eight months later I have an opportunity to see out the season with them in the Six Nations.’ Photograph: Billy Stickland/Inpho

Ireland are set up to hunt Italian and French possession in the rebooted Six Nations. That is the only way to interpret a team sheet that includes Tadhg Beirne, CJ Stander, Will Connors and Caelan Doris.

For Beirne, Saturday is a second coming of sorts. The Kildare native’s selection to face Italy at an empty Aviva Stadium also emphasises the current strength in depth at secondrow.

Iain Henderson is suspended and Ryan Baird’s much-anticipated charge onto the international scene has been postponed by injury. Quinn Roux is a natural scrummaging lock but the South African’s latest in a long line of wounds, shoulder damage at training, means Beirne gets to play alongside James Ryan.

The 28-year-old identifies his role as the junior partner in a duo that is set to run onto Paris and, potentially, deep into the Autumn Nations Cup.

“James is a phenomenal player, he’s a leader as well, you can see that around the lineout,” said Beirne. “He’s been taking the reins in terms of calling.

“From the first moment I played with him, I think it was in a Lansdowne jersey a few years back, his development has been incredible.

“I had a chat with him the other day and he said he’s still only 24. I was a bit shocked but I’ve a great relationship with him. If anything I’m probably learning from him even though I’m his senior but that’s just the type of player he is.”

The Ryan era is confirmed by Hugo Keenan and Will Connors bringing the number of Ireland under-20s from 2016 in this weekend’s matchday squad up to five. Jacob Stockdale and Andrew Porter, like Ryan, were first capped by Joe Schmidt against the USA in 2017 but Keenan and Connors also featured on Ireland’s journey to the Junior World Cup final.

“A winning mentality certainly helps and you certainly see that pouring through them in terms of the preparation,” said Ireland coach Andy Farrell when the increase in 2016 graduates was highlighted. “It does help along the way.”

If Ryan, Stockdale, Porter, Keenan and Connors are the 24-year-olds Farrell will build a team around en route to France 2023, this weekend leaves Beirne in a twilight zone between the veterans and the future.

“It’s a completely strange year and anything can happen,” he said. “Back in February I’m shouting for Ireland from my sofa, probably still on crutches, got a boot on and then eight months later I have an opportunity to see out the season with them in the Six Nations.

“Look it’s been a weird one, it’s great for me, it’s an unbelievable opportunity for me on Saturday.”

The opportunity to deny Italy from playing an expansive style under Franco Smith should be meat and drink to Beirne but it was put to him that CJ Stander’s expertise at the breakdown, of late, is stealing his thunder.

“I think he got five turnovers in his first game. That is a phenomenal stat out of any game. Me and him have been working after training in that area. He is much better than me at it. In any of those competitions we have he definitely comes out on top.”

We imagine Beirne and Stander having a good old wrestle after sessions in Carton House.

“We just have a speed drill in terms of who gets to the ball. He is always fast off his feet and into those areas. That’s something he has been practising and you see the knock-on effect in games by how quickly he gets into those rucks when he sees an opportunity.”

Beirne and Stander, alongside Doris’s proficiency in this area and Connors’s chop tackling expertise all adds up to an Ireland side primed to become the turnover kings during the second coming of lockdown.