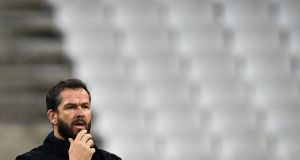 Ireland head coach Andy Farrell: 'I don’t want us to dip our toes in the water and think: ‘We are in this game.’ We need more than that.' Photograph: Anne-Christine Poujoulat/AFP via Getty Images

When 2020 is finally in the books Ireland coach Andy Farrell could well have capped 11 new players. Currently the number is six with three more – James Lowe, Billy Burns and Shane Daly – named in a 34-man squad for the inaugural Autumn Nations Cup.

Despite this transitional period, the former Wigan Rugby League enforcer remains intent on moulding an Irish team in his own likeness.

“To be the side that we potentially want to be, we’ve got to have a different shift in mindset,” said Farrell as the squad regathered at Carton House following last Saturday’s 35-27 defeat to France. “Everyone said Paris was going to be tough, nobody really gave us a hope going there, but we had enough opportunities in the first half. If we had the ruthless mindset to take those opportunities, I thought we could have been 10 points up at half-time.

The most exciting addition is a 28-year-old winger from Nelson, New Zealand, who was only denied selection for the All Blacks against Samoa in 2015 due to injury, with James Lowe set to feature against Wales next Friday night at the Aviva Stadium. Since joining Leinster in late 2017, the genial Kiwi has provided the same durability and power that led the IRFU to recruit CJ Stander and Bundee Aki, via the residency law.

“If you were a betting man you would be pretty excited to see James play, wouldn’t you?” said Farrell with a nod to his 33 tries in 49 provincial appearances.

Lowe’s character is the antithesis to the usual process-driven, cliché-addicted professional athlete, and that feeds directly into Farrell’s coaching mantra: ‘Be yourself’.

“He’s a free spirit, he’s a happy-go-lucky lad. He enjoys himself on the training field. Not too much in the classroom with the meetings; not too much there because he just wants to get out and run around with the ball but he is a likeable soul.”

Lowe’s presence coupled with the return of Keith Earls – 30 tries in 84 caps – forces Farrell to take a stern look at his back three options, particularly after Jacob Stockdale’s error-strewn display at Stade de France.

“I know what Jacob is and that’s a dangerous player. His form against Italy, everyone was raving about him, and he talked [this week] about [improving] the fundamentals of his game. Having said all that, the yardage he picked up for us and the yardage with his boot is something we need to keep progressing with as a well.”

This suggests that Stockdale will be retained at fullback against Wales and in Twickenham, with Hugo Keenan, Andrew Conway, Earls and Lowe battling for two wing slots. The coach also ruled out a recall for Simon Zebo.

Other areas of Farrell’s squad are not so healthy. Billy Burns did enough for Ulster in Cardiff last weekend to bump Connacht’s Jack Carty from outhalf cover behind Johnny Sexton, who kind of apologised for his behaviour after being replaced by Ross Byrne in Paris.

Byrne is also retained in the training panel despite struggling during his 11-minute cameo against France.

If Burns, Lowe and Daly feature this month against Wales, England or Georgia they would join Keenan, Will Connors, Rónan Kelleher, Caelan Doris, Ed Byrne and Jamison Gibson-Park as new caps in a group so obviously at the start of their journey to France 2023.

Farrell did keep the door ajar for “development” players like Craig Casey and Harry Byrne to be promoted if injury or form demands it.

“We got rid of the word ‘development’ this time around because those players are playing in the Pro 14, and trying to find their feet at that level, and we know the difference in standard, so sometimes you got to get the balance right to make the development good for them.

“Having said that, we are always watching. You never know what can happen in a campaign.”