TV View: Simon Zebo was forecasting an Ireland victory ‘by 15’. Bless him 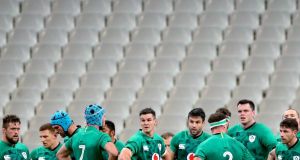 A Six Nations decider on the last day of October, with a locked down Ronan O’Gara locked out of the Stade de France, forcing him out of Virgin Media’s starting line-up, and the BBC covering the game from Salford with Zoomy contributions from Thomas Castaignède in Biarritz and Simon Zebo from his Paris home. Two years ago it was Jonathan Sexton’s drop goal that was spinning, this time around it was our heads.

After England could only scrape a 34-5 victory over Italy in Rome, meaning our lads wouldn’t, after all, have to completely muller France, Joe Molloy had significant title-winning hope in his heart. “We were anticipating England putting up a cricket score,” he said, “they haven’t done it!”

Matt Williams, though, took the wind out of his sails by reminding him where the game would be taking place – “This is Paris!” – which is what John Inverdale did to Paul O’Connell too by pointing out that Ireland had only won five times in the city since the second World War and hadn’t had back-to-back triumphs there since 1928.

Still, though, a win by a measly six points would do the trick, so Joe asked his panel if it could be done. But to be honest, the more pressing question he should have put to them was: how can Rob Kearney have a tan like that one day short of November when he hasn’t even moved to Perth yet? And seeing as Rob was on the panel, the mystery could have been solved.

Instead, Rob talked about the likelihood of France “putting up a lot of contestables” and the excellence of Will Connors’ “chop tackling”, meaning, for some of us, he might has well have been talking Swahili.

Back on the Beeb, Simon was forecasting an Ireland victory “by 15”, bless him, Paul was highly hopeful too, if not that highly, while Martin Johnson whipped the red carpet from under both their feet with his prediction: “France.”

Come half-time, it was 17-13 for the French, so Martin was entitled to feel 50 per cent smug, but instead he doffed his cap to Ireland, saying that “if you’d walked out of the room and missed the two French tries you’d think Ireland were winning this game quite comfortably”.

This, of course, was akin to saying if the Queen had Wotsits she’d be the king, but he meant well, suggesting that Ireland could turn it around in the second half.

Full-time. “Ireland were very unIrish,” he said, Paul adding to the identity crisis theory when he reckoned that the cheap-ish concession of points in the second half made Ireland look “a little bit French”.

No matter, it wasn’t to be, but with the next Six Nations only three months away, at least there won’t be too much time to stew over what-might-have-beens.

Monaghan will have to stew a little longer over their Championship exit at the hands of Cavan, of all people. “The Drumlin Clasico,” as our Sky commentator Marcus Ó Buachalla described the first knock-out game of this peculiar season, Jim McGuinness reminding the players involved, somewhat starkly, that “there is no tomorrow”.

Peter Canavan agreed, although he was distracted by Kieran Donaghy’s headwear. “He’s obviously been watching too much Peaky Blinders,” he said, when, in fact, Kieran, out of county loyalty, had actually borrowed from Michael Healy-Rae’s wardrobe.

“With everything going on,” said Jim, “hopefully the Championship will give everyone a wee bit of respite, let them relax and forget about the world for a couple of hours”.

When Cavan goalkeeper Ray Galligan kicked that winning point in injury time of extra-time, you can only imagine Monaghan people were relieved to be returning to thinking about pandemics and similarly less stressful things.

The player of the match was, no contest, our presenter Grainne McElwain, who Marcus had told us was “a proud Monaghan woman”. If whoever loses the US election on Tuesday is as gracious in their concession speech as Grainne was when she dug deep in to her reserves of magnanimousness to praise Cavan, despite knowing her county’s tomorrow had been obliterated, they’ll be doing mighty well.