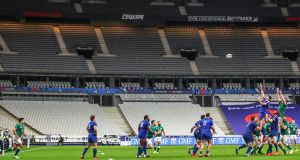 A view of a lineout during Ireland’s Six Nations loss to France. Photo: James Crombie/Inpho

Sift through the debris and be done with Paris. There were multiple systematic failures in Ireland’s crash landing at the Stade de France.

Some malfunctioning parts are all too familiar, some are brand new individual mistakes, including any fullback’s worst nightmare, but most of all Ireland tortured themselves out of touch. Especially the two second half lineouts that denied access into a contest that seemed lost until Robbie Henshaw conjured a try from nowhere.

Set piece is James Ryan’s responsibility. But the senior man in this Irish pack - despite only being 24 – is instantly forgiven due to a herculean performance littered with wanton aggression. Alongside CJ Stander, Ryan was the shining world class performer in a sea of mediocrity and inexperience.

Reasons for defeat can be found in multiple areas. Like, Johnny Sexton’s decision to chase a try before half-time, when a sticky four point deficit demanded less risk and more point gathering. There followed a stream of one out carries down cul de sacs – an old misdemeanour revisited – before Dylan Cretin mugged Will Connors.

Or we could pick out Ross Byrne’s miscued line kick not long after Sexton was visibly disgusted with Andy Farrell’s curly finger. You might think the Irish captain would stop shaking his head in such naked protest when his face filled the giant stadium screen.

That festering wound might need tending. Or not. Coach and captain will presumably move quickly past an image that will forever represent this game.

Removing Sexton proved to be a mistake by the rookie head coach. Ireland needed their 35 year old leader to bridge an eight point gap with 10 minutes remaining. His replacement made several unforced and costly errors, throwing ball to ground, under kicking a vital penalty and grubbering out of play when ball retention seemed essential.

Ireland also needed their captain because Ryan, Stander, Caelan Doris and Peter O’Mahony were struggling to cope with Paul Willemsse and Bernard Le Roux, menacing Afrikaner locks, and a phenomenal French backrow. That’s before their mammoth bench, in comparison to Ireland’s talent deficiency in reserve, arrived.

You have to pull some of these threads. Like, that shambolic period when the team needed to calmly build a score after Henshaw’s stubbornness dragged it back to 28-20.

“The feeling out there and after it was definitely that we could have easily won the game,” said Tadhg Beirne. “I think a few moments and a few parts of the game just didn’t go our way, we made a lot of mistakes.

“They pounced on a lot of our loose ball and before we knew it, we were standing underneath our sticks.”

On 64 minutes Stander pounced on secure French ball for a spirit rising turnover deep in Irish territory. Conor Murray messed up a long range touch finder so Stander suffered the unnecessary damage of heading into another ruck to steal the ball off France once again. The penalty was inside Sexton’s range but he continued to invest in the lineout version of a Ponzi scheme.

Not to be undone, Stockdale burst into the line and flung a pass behind Henshaw.

“The thing is a lot of the areas that didn’t go right were easy fixes,” Beirne continued. “Sometimes they’re just the bounce of the ball, other times structurally you just switch off or anyone for that split second. When you see these things happen in front of you on the screen, you almost fix them straight away.

“They stole one or two crucial lineouts and that’s an area we’re always trying to work on and, going forward, I’ve full faith in our lineout and our maul and I don’t think it’s an area that needs much fixing. It just didn’t go well at certain points in the night and that happens in games.”

We have heard this flawed reasoning from Irish players grasping for positives in the recent past.

“We’ll just continue to focus on those areas and I’m sure we’ll come out the other side of it.”

Beirne, who performed admirably but will struggle to stall Iain Henderson’s return from suspension, was asked if he ever faced a bigger pack.

“I wouldn’t know to be honest, a lot of the French sides are that big. La Rochelle, Toulon.”

As big as Willemse?

So, Ireland stumble into the recently invented Autumn Nations Cup, seeking “easy fixes” to problems that remains unsolved since November 2018.

The wonder is how Farrell, a brilliant motivational speaker yet inexperienced chief of staff, will react.

“Look, I think for Faz is obviously going to be frustrated from losing when everyone feels like we could have won,” Beirne continued with the line that remains hard to swallow.

“The way he addresses the room is very good, he stays calm but he is very stern in what he says and very clear too. That’s all you can ask for in a coach, he won’t lose the rag and there’s not much point in losing the rag after a game like that either.

“As frustrating as it is for him, he can sense our frustration in the group. Over the next few days, he’s going to have to go through the game numerous times and it’s probably on Thursday or Friday that we’ll see the real side of where we went wrong.”

There are plenty of clues amidst the wreckage of this silent Parisian excursion.

4 Gordon Elliott hearing to start at 9.30am on Friday

Rare display of frustration precedes fireworks for McIlroy 21:28
Andrew Coscoran and Paul Robinson into 1,500m final 21:07
Fulham own goal gives Spurs their third win in a week 20:51
Tsitsipas beats Hurkacz to keep ATP 500 title hopes alive 20:43
Another Richarlison goal wins it for Everton at West Brom 20:20
Crossword Get access to over 6,000 interactive crosswords