Backstabbers or boys done good: how do All Blacks view Celtic Kiwis? 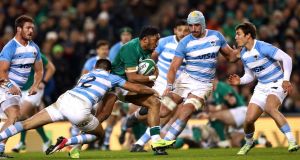 Bundee Aki has become a key player for Ireland since his debut in 2017. Photograph: James Crombie/Inpho

New Zealanders have never quite known what to make of their own who end up playing against the All Blacks.

Kiwis playing against the All Blacks is a story that spans most of the professional age and yet is one that still doesn’t deliver a universal response.

Tony Marsh, after a couple of years on the edge of Super Rugby, was deemed a pioneering hero when he ended up playing for France at the 2003 World Cup.

New Zealand-born and bred Quade Cooper, on the other hand, became the most hated man in the country when he emigrated to Australia in his teens and ended up playing for the Wallabies.

The emotional response, it seems, will be determined on a case-by-case basis, but essentially influenced by how close the player in question came to being an All Black and to which country he is committing.

That’s why former Hurricanes team-mates Blade Thomson and Brad Shields will be playing Test rugby this month with entirely different feelings generated about that in New Zealand.

Thomson was always seen as an honest, hard-working versatile tight-loose forward who was more than unlucky with injuries.

He never really came close to All Blacks selection despite the respect he earned and the fact he is playing for Scotland means most Kiwis wish him all the best.

He’s playing for the land of his grandfather with New Zealand’s blessing, partly because there is a strong affinity with the Scots, whose footprint in the South Island is deep.

There is also the inescapable truth that New Zealanders don’t particularly fear Scotland or see them as a genuine world force.

Shields hasn’t felt any of that warmth because he played for the New Zealand Under-20 team alongside the likes of Brodie Retallick, Sam Cane and Beauden Barrett and chased the All Blacks jersey hard and then ended up having to turn it down.

He was called up to captain the mid-week All Blacks team against a French XV this time last year and probably would have won a cap against Wales as Kieran Read had to pull out injured.

But when the call came he had to say no because he was intending to sign with Wasps and commit to England.

Bad luck or bad timing, it doesn’t matter, as he said no to New Zealand and yes to England - a team that the All Blacks not only take hugely seriously, they still don’t particularly like.

The pathway an individual follows to an adopted country is also important.

Those who have heritage - a genuine, meaningful and proven connection with the jersey they commit to tend to win a more empathetic and accepting reaction, compared with those who take a club contract somewhere and three years later are playing Test football on the basis they have met the required residency requirement to be eligible.

And it is of course this latter route that took Bundee Aki to Ireland’s midfield and Jared Payne before him.

Aki’s move to Connacht carried a cold, clinical, calculating element to it that probably ended up with Kiwis wondering more about the motives and thinking of the Irish Rugby Union than it did about the player.

In some ways he was simply offered something that was too good to turn down and no one could judge him for that.

He was starting to be more influential with the Chiefs: starting to show a wide enough range of skills to be considered a player of interest. But there were so many others so far ahead of him that the prospect of being reasonably high on Ireland’s pecking order, as opposed to somewhere in the middle of an extensive pack in New Zealand, seemed like a good reason to throw his lot in with the former.

But while the player may be immune from the New Zealand public’s wrath, he is still the symbol of a strategy that isn’t respected or supported by New Zealanders.

New Zealand spend millions developing players and Ireland using that programme as their own is not something anyone enjoys seeing.

The concept of scouring the world as part of the national side’s succession planning is also one that is little loved in New Zealand, where the All Blacks have shown a remarkable capacity in the last two years to dig into their own talent pool and build the next generation of Test stars.

Ireland are making Test rugby feel like club rugby with this ‘go where you have to’ recruitment strategy. Ireland are within the rules doing what they are doing, but outside the spirit of international rugby.

They have also, of course, beaten the All Blacks and with that victory in Chicago, changed everything.

Kiwis love the Celts but some of that warmth in a rugby sense was built on the certainty that Ireland were never actually going to be so impertinent as to beat the All Blacks.

So in shedding the loveable loser tag, Ireland have forced New Zealanders to reconsider how they feel about their players defecting there.

Whatever the mood building up to this Saturday’s match in Dublin, it may change if a Joe Schmidt-coached Ireland are inspired to victory by a storming performance by Aki.

What won’t help is that if another former Chiefs player, James Lowe, also ends up in the Irish national team once he has served his three-year residency.

Under a different coaching panel Lowe, who is impressing everyone at Leinster, could easily have been an All Black.

His ability was never in doubt but when the All Blacks can’t find room in their squad for World Cup winners Julian Savea and Nehe Milner-Skudder, players as good as Lowe can see that their time may never come.

New Zealand already feel under siege from predatory French clubs and the increasing allure of short term-deals in Japan that are pulling their best players in all sorts of directions.

Seeing some of their former prospective All Blacks turn out against them in the Test arena only serves as a reminder of their vulnerability.

An Irish team that wins suddenly starts to look like an Irish-fusion team, with the Kiwi element within it no longer viewed as happy-go-lucky opportunists, but men who have stabbed their homeland in the back.

He’s been an outstanding player for Connacht and was rewarded with a new three-year contract in 2016 and while not getting the same game time this season still provides experience and quality. He became eligible to play for Ireland in 2017.

With 11 caps to his name he has proved to be a brilliant acquisition for the Ireland squad with a series of excellent performances, the latest of which came against Argentina which he capped with his third try.

He made his Ireland debut off the bench against South Africa in 2014 and won a further two caps, both as a replacement. He hasn’t featured regularly for Ulster over the past two seasons.

The former New Zealand Under-20 international has been ridiculously unfortunate with injuries, specifically neck issues. He qualified in January of this year.

He will qualify to represent Ireland next summer just ahead of the four Rugby World Cup warm-up matches.

The tighthead prop won the last of his four caps in a 2015 World Cup warm-up match when coming off the bench against Scotland, having won his first before he played for Leinster in the 2012-2013 season.

He qualifies for Ireland the summer after the Rugby World Cup in Japan and given his impact so far in his Leinster career to date, Irish supporters will be salivating.

He won the second of two caps against Japan in the summer of 2017 scoring a try that day.