Ian Flanagan settling into Munster role after a challenging start 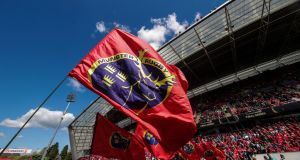 Ian Flanagan has faced a number of challenges already in his role as Munster CEO. Photo: Billy Stickland/Inpho

One of the major stumbling blocks to a proposed global calendar is that club and provincial rugby would have to break with over a century of tradition and play through the summer months. The French clubs have already dug their heels in over such a move and the Munster chief executive Ian Flanagan has underlined that his province and Irish rugby are opposed to summer rugby.

Nor is it a question of being hostages to tradition. Akin to the French clubs, who are reluctant to compete with established summer sporting events such as the all-consuming Tour de France, which lasts for over three weeks and takes in four weekends, one ventures Munster and Connacht would probably find competing with the two All-Ireland Championships particularly trying.

“I think it’s clear historically that the Irish position is that we’re not in favour of summer rugby and that’s a position we have held consistently in Irish rugby and that is one that we will continue to hold and express in those meetings and in that dialogue,” said Flanagan after due consideration in an audience with the media on Tuesday.

“The only other thing I’d say is we’re living through a period where we can adapt to anything, so we’re certainly not frightened of the final proposal which is agreed. We can adapt. But certainly in Irish rugby, while we’re not afraid of summer rugby, that is not our first preference.”

The 46-year-old, who grew up near Musgrave Park, has had a varied career in the business and commercial world of sport. He joined Munster from Treble Group, where he has held the position of Global Head of Football since 2016, prior to which he was Commercial Director with Leicester City in the four years which culminated in them winning the Premier League.

What with the lockdown, Munster’s European pool exit and James Cronin’s one-month ban for a doping violation, it’s been a challenging start for Flanagan, who only succeeded the late Garrett Fitzgerald in October.

A golden generation enabled Munster to twice scale Europe’s mountain top and, albeit without a trophy for almost a decade, they have remained contenders. But Fitzgerald maintained this was a minor miracle given the socio-economic factors which worked against Munster.

This has been compounded by Leinster’s trophy hoarding in the last decade, but Flanagan maintained: “We’re ambitious. I don’t think anyone is in any doubt about how ambitious we are. We want to win silverware.”

Ala Leinster, Flanagan confirmed that matchday revenue accounts for almost 50 per cent of the province’s estimated €17 million annual turnover and the recent lockdown has merely reaffirmed his view that this is disproportionately high.

Further revenue will be generated by selling the naming rights to Thomond Park. “There are probably two or three relatively serious conversations underway. They have largely been put on pause. We’ll pick them up when it’s the right time to do that,” said Flanagan.

“We are targeting partners that we hope will have the ability to give us things other than money and to be able to help Munster to grow internationally especially.”

Munster are currently researching the likely capacities at Thomond Park were social distancing of either one or two metres to be applied. With the Aviva Stadium set to be the sole Irish host for the concluding stages to the 2019-20 season, Flanagan said that “hopefully” Thomond Park will be used for the start of the 2020-21 season, which is pencilled in for early October.

“No one likes being associated with a doping violation, let me be clear about that. I am also very clear that we have very rigorous and stringent processes in place.”

“Ultimately, this boils down to human error on the dispensing side and, for good or ill, human error is something that we have to live with,” said Flanagan.

“I think everyone can understand why the sanction was imposed but also understand that, in the words of the judicial officer, it was down to an unexpected and serious error on the part of the pharmacy.”