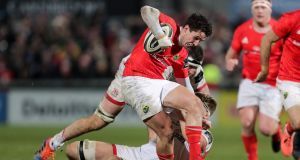 Joey Carbery is expected to return to action for Munster in September. Photograph: Laszlo Geczo/Inpho

All of their squad having passed tests for Covid-19, the Munster and Leinster squads returned to full training on Monday, with Munster confirming that Joey Carbery will miss the proposed restart of the 2019-20 Guinness Pro 14 at the end of August. However, he should overcome wrist and ankle injuries to resume playing in September.

Furthermore, Tadhg Beirne is continuing to rehab successfully from the serious ankle injury he suffered in Munster’s Heineken Cup pool defeat away to Saracens last December, while new signing Damian de Allende, Keith Earls and Calvin Nash are expected to recover from short-term injuries ahead of the proposed interpro derbies, beginning with a game against Leinster at the Aviva Stadium on August 22nd.

CJ Stander and Chris Cloete did not return to training as they have recently returned from South Africa and must now self-isolate for 14 days in accordance with government guidelines. John Ryan has undergone a minor operation on his shoulder.

Most of the Academy squad have not returned to training to limit the number of people working in the high-performance centre. However, academy quartet Thomas Ahern (lock), Jake Flannery (outhalf/fullback), James French (prop) and Ben Healy (outhalf) are training with the senior players.