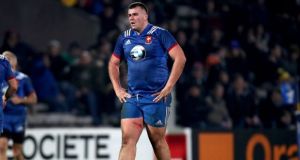 Daniel Brennan has played for France at under-20 level. Photo: Inpho

Daniel Brennan, son of one-time Leinster and Irish lock-cum-backrower Trevor, has earned his first senior professional contract at Top 14 club Montpellier after a couple of years in the club’s academy.

Brennan moved to France when he was three in 2002 on foot of his father joining Toulouse, with whom Brennan senior won two Heineken Cups, and came up through the underage ranks.

The 21-year-old prop helped France win the Under-20 World Championships in 2018 before taking the decision to join the Montpellier academy, having also been sounded out by Munster. Younger brothers Josh (like his dad a lock-cum-backrower) and Bobby have also come through the Toulouse underage teams. Josh has also played for the French under-17s and was a late call up to the French squad when they retained the Under-20 World Championship last year.

First team outings have been hard to come by for the eldest of the siblings at Montpellier, whose head coach is the former Toulouse and French outside back Xavier Garbajosa, but he has stuck to his task and the club confirmed today (Tuesday) that “Daniel Brennan and (outhalf) Thomas Darmon will leave the Training Center to become professionals as of this season. A great reward for these two young players who, together, already have more than 32 game sheets with the pros (27 for Thomas Darmon and five for Daniel Brennan).