Jack Conan: ‘There’s no professional game in this country without strength of our clubs’ 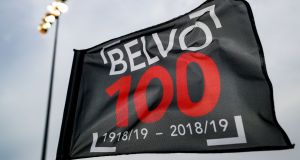 In response “to a worryingly uncertain future”, the players of Old Belvedere rugby club in Dublin have created an initiative calling on its supporters to protect its future.

“The Bedrock” initiative appeals to Old Belvedere’s players, members, associates and friends of the club to support it financially.

In a move that highlights the financial impact the coronavirus outbreak has had on sporting clubs nationwide, they are asking for a donation equivalent to that of a player’s annual membership, which is currently €250.

Contributors will be recognised by having their name, family name, or the name of someone lost tragically to Covid-19 represented on the walls of the club.

The club, which was first established in 1918-19 has produced 14 senior internationals such as Jack Conan, Fergus McFadden, Ollie Campbell and Neil Francis. Conan explained to The Irish Times: “In these increasingly worrying times for clubs and players whether professional or at grassroots level, it’s important to stay connected and together. There is no professional game in this country without the strength of our clubs.”

The club said in a statement that the walls will be unveiled when it is safe to reopen the club: “As well as protecting the club’s future, this fundraising scheme will symbolise what it means to come together as a club.

“Like all amateur sports clubs in Ireland and around the globe, Old Belvedere has suffered commercially at the hands of Covid-19. The pandemic has not only caused a postponement to amateur and professional games all around the world, but it has had a drastic effect on the fundraising that allows clubs and organisations to keep their doors open, to keep players supported and to keep grassroots club culture alive.”

Paul Cunningham, president of Old Belvedere RFC, said, “This initiative has been developed by the players to combat the difficult situation in which we find ourselves. Like all clubs of every sport fundraising plays a huge role in our season and I would encourage all clubs to consider similar initiatives for their own benefit.”