Ringrose and Healy fit again as Leinster return to training 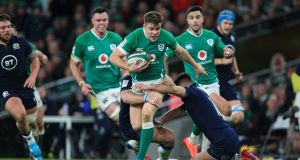 All of the Leinster squad have returned to full training bar long-term casualty Dan Leavy and James Lowe, who has flown back to New Zealand for personal reasons.

The 26-year-old Leavy is, according to the province “in the final stages of his running rehabilitation” following two operations on the significant multi-ligament knee injury he suffered in Leinster’s epic quarter-final win over Ulster at the Aviva Stadium on March 20th, 2019.

Garry Ringrose, whose fractured hand injury had sidelined him during the Six Nations, Cian Healy (hip), Conor O’Brien (hamstring) and Vakh Abdaladze (back) have all resumed full training with the rest of the squad.

“James Lowe has returned home to New Zealand for personal reasons. On his return, James will follow all Government health advice and guidelines upon arrival back in to the country.”