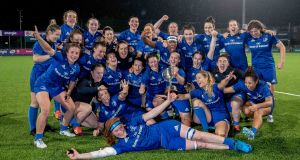 Leinster retained the IRFU Women’s Interprovincial Championship with a 25-12 win over Connacht at Energia Park. It’s the first time the province have won back-to-back titles, but they were made to work hard for the perpetual trophy after a strong second-half comeback from Connacht.

“That’s what I’m most proud of,” said winning captain Sene Naoupu, “the girls’ ability to turn it around and change the momentum in the second half. It’s the last time we’ll play as this exact group. For some of the girls, it’s probably the last interpro so that makes it even more special. There’s a huge amount of talent coming through and that’s really exciting as well.”

It was a typically clinical start from the champions, who made full use of their time in the opposition 22 with two tries in the first 11 minutes. Lindsay Peat was first to strike from close range after Naoupu’s initial break.

It was Peat who carved up the Connacht defence three minutes later to create an overlap for Elise O’Byrne White and Leinster were 15-0 up after 20 minutes when they found even more space on the left wing for Grace Miller.

Connacht were struggling against an aggressive rush on their midfield, but that changed in the second half with the introduction of Nicole Fowley. The outhalf’s kicking game in worsening conditions put Leinster’s back three under huge pressure and Aoibheann Reilly’s quick feet in midfield gave Wasps-bound Edel McMahon the platform to go under the sticks.

The new plan also unlocked the pace of Beibhinn Parsons and the young winger accelerated on to Fowley’s pass to finish off a big rumble from the Westerners’ pack on 55 minutes. For the first time in this Championship, Leinster were a try away from losing their lead in the second half.

Ben Armstrong’s women had the time and the resources to respond. They reshuffled their backline to restore confidence under the high ball and another Sene Naoupu break opened things up for Hannah O’Connor to score. Judy Bobbett’s try sealed the win with seven minutes remaining.

Munster vented their frustration at not making the Interprovincial decider with a 39-12 win over Ulster in the third-place playoff. The first try came after just 59 seconds through Eimear Considine with Roisin Ormond crossing twice and Steph Carroll and Fiona Hayes scoring a try apiece.