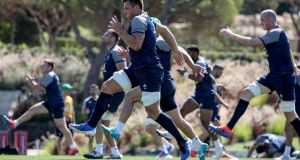 The last World Cup arrived just a fraction too early for CJ Stander but this one can’t come soon enough.

The 29-year-old joined Munster in 2012, but didn’t arrive until mid-October, thereby meaning he only became eligible to play for Ireland by dint of the three-year residency ruling in the week of the fateful 2015 quarter-final.

Ask him when he first had the dream or ambition to play for Ireland in this World Cup and he says from that week.

His boyhood dreams of playing in a World Cup were crystallised by the landmark 1995 tournament happening in his native South Africa. The Springboks return to the Test fold and first appearance at a World Cup culminated in one of the most iconic images in the history of the sport, when Nelson Mandela handed the William Webb Ellis trophy to Francois Pienaar. Stander was five.

“I don’t really remember the final, I don’t know why. If I think back, our family probably had a massive barbecue and made a massive day of it. But, earlier games, I remember just sitting on a single, slide-out sofa for myself one Friday night and watching one of the games.”

“I can’t remember which game or who was playing but I remember watching the World Cup and thinking to myself ‘that’s unreal’. Five years old, I’m still taking boogers out of my nose at that stage. After that, all the World Cups, all the games, I’ve been glued to the TV. It’s been a big thing for our family as well and it would be an unbelievable dream to go to a World Cup.”

Twenty four years on and Stander is now enjoying the euphoric feeling of becoming a dad for the first time after his wife Jean-Marie gave birth to their daughter Everli on August 2nd.

“She’s doing well, she’s feeding well, sleeping well. Jean-Marie is doing great. She’s perfect,” says Stander. “I got a few days off as well, spent some time with them, just to make sure they got home okay. For us to be together for those four or five days was the best time of my life.”

They chose the name Everli as a variation of a clothing brand with the spelling Everly. As well as liking the name, it has another advantage.

“You see in Afrikaans, people translate names to English and Afrikaans, both ways. So in Afrikaans I’m called [phonetic]See-ah Yea. My headmaster would call me See-ah Yea. I don’t want my kid to have two names because that’s difficult because sometimes now someone calls me in South Africa, I’m there, ‘Is that me?’ But it’s going to be difficult to translate that [Everli]. Just one name!”

In the event of a boy, they had several options between his name, Christiaan Johan, or that of his father, Johannes Hendrik. “If I want the farm, I probably have to give my son that name,” quips Stander.

However, being away from Jean-Marie and Everli this past week in the Algarve has been tough.

“If I Skype now and see pictures of her, she’s changed already. When I left, her eyes were still closed because she was born two weeks early but just to see her now, being busy, moving around, on Skype, it is tough.

“I knew it and Jean-Marie knew it was going to happen, but there’s a big, big goal at the end of this and if I can celebrate it with them, I mean....” he says, his thoughts drifting away to another dream.

This past week in Quinta do Lago, Stander is not so much acclimatising himself as reacquainting himself with the rugby playing conditions in which he was reared.

“You see the boys getting out the sunscreen and stuff and I don’t even bother. I just like the weather. It’s perfect. There’s a nice breeze as well so it’s good for training. We don’t have the humidity we’re going to get in Japan but I think the other day it was 36 degrees. That’s what you want.”

“The ball is quicker. It bounces quicker. The boots struggle to go in, so just change the boots a little bit, the stuff I’m used to. And a lot of the boys, especially the backs, like this type of weather.”

In the meantime there is the not insignificant matter of three more warm-up games, and Stander knows he and his teammates need to be braced for a big and bruising England at Twickenham on Saturday.

“That’s what we learned in the Six Nations. That’s a big part of their game, their physicality. That drives a lot of their players in the game. They’ve got a lot more in their game now, we could see that in their game last week. They’ve got finesse out the back. From our side, physicality is not something you can train for. It’s a more mental thing.”

Reflecting on England’s 32-20 win at the Aviva Stadium last February, Stander says: “I think we just started the game slow. In the first 10 or 20 minutes they ‘upperhanded’ us and we couldn’t get back. We tried to come back but if you start a game like that against someone that has tempo in their game and a big physical presence and is on the front foot, you’re going to struggle to pull them back.

“We were disappointed with that game and that led us deeper into the Six Nations. It didn’t really help us a lot. Again I think it’s an attitude thing. You need to pitch up on the day and be ready to go.”