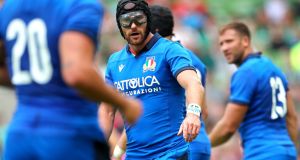 Ian McKinley has missed out on a place in Italy’s squad for the Rugby World Cup. Photograph: James Crombie/Inpho

Ian McKinley has lost out in the numbers game for Italy’s World Cup squad with head coach Conor O’Shea deciding to take just two outhalves among his 31-man panel for next month’s tournament in Japan.

The 29-year-old Dublin-born player played 51 minutes of the recent 29-10 defeat to Ireland at the Aviva stadium, his ninth Test appearance for the Azzurri.

Former Ireland fullback O’Shea has decided to bring three scrumhalves and two outhalves to Japan, with Tommaso Allan and Carlo Canna battling it out for the No 10 shirt. The three scumhalves named are Tito Tebaldi, Callum Braley and Edoardo Padovani.

O’Shea has identified an upset win over South Africa as a possible path out of a tough Pool B. The Italians have also been drawn with world champions New Zealand, Namibia and Canada.

O’Shea said the improvement he had overseen since taking over in 2016 meant they had a chance of making the last eight if they played at their very best.

“Compared to when I started my journey here, we now definitely have a better team, with more internal competition and much improved performances.

“Recently, we have shown that we can play against the top teams when we play our best game.

“At the World Cup we absolutely must win against Namibia and Canada and then focus on the other two big challenges we have. I believe that against South Africa, with this team, we can create an opportunity on our day.”

Italy beat South Africa 20-18 in Florence in O’Shea’s first year in charge but have never got so much as a draw against New Zealand in 15 attempts.

A 13-try, 85-15 victory over Russia at San Benedetto del Tronto on Saturday should send the Italians off to Japan with a spring in their step.

O’Shea said choosing his 31-man squad, and informing the players that missed out, had been the toughest job he had faced in his rugby career.

Number eight Sergio Parisse will captain the squad at his fifth World Cup and hooker Leonardo Ghiraldini was also selected despite suffering a serious knee injury in the Six Nations earlier this year.

Parisse, Ghiraldini and utility forward Alessandro Zanni, who have all played more than 100 times for their country, will form an experienced core to a youthful squad.

“Leo, together with Parisse and Zanni, are playing the last matches in the Italy shirt of their extraordinary careers,” O’Shea added.

“We want to make their dreams come true and we have the cards to be able to succeed.”

Italy open their World Cup campaign against Namibia in Osaka on September 22nd.

South Africa have suffered a blow to their preparations after loose forward Marcell Coetzee was ruled as he will undergo ankle surgery on Wednesday that will sideline him for 12 weeks.

Coetzee was replaced after 17 minutes of Saturday’s 24-18 World Cup warm-up victory over Argentina in Pretoria but coach Rassie Erasmus said he was hopeful the Ulster backrower would be available when he names his 31-man squad on August 26th.

The Boks are already without number eight Warren Whiteley through injury, and must now find a back-up to the influential Duane Vermeulen, with Francois Louw having played at the back of the scrum this season as well.

The Boks have also released four players for domestic Currie Cup duty at the weekend, which suggests they will struggle to make the final World Cup squad as the team continue to prepare this week in Bloemfontein.

South Africa open their campaign against New Zealand in Yokohama on September 21st.

Elsewhere, Juan Manuel Leguizamon will follow a select group of Argentines to have played in four World Cups after he was named in the country’s 31-man squad.

The 36-year-old backrow, who made his international debut in 2005, will join Felipe Contepomi, Agustin Pichot and Argentina coach Mario Ledesma as the only players from the South American nation to have achieved the feat.

Experienced outhalf Nicolas Sanchez, the country’s leading points-scorer, is one of three overseas-based players included in the selection. The Stade Francais player is joined by fellow pivot Benjamin Urdapilleta from Castres and Saracens prop Juan Figallo.

“We always said that we would take the best and that players based overseas would add value. The squad [includes] players that added value both on and off the field,” Ledesma said in a statement on Monday.

“From day one, we said we’d give priority to the players based in Argentina. That was our selection criteria and it was very clear for everybody.”

The majority of the squad, which has 17 forwards and 14 backs, is made up from Jaguares, who were beaten finalists in Super Rugby this season.

Pucara centre Lucas Mensa, who debuted against South Africa on Saturday also made the cut.

Joaquin Tuculet recently returned to the side for the first time in 18 months after injury and is one of three fullbacks along with Emiliano Boffelli and Santiago Carreras, who also earned his first cap at the weekend.

Ledesma has included only two specialist scrumhalves in Tomas Cubelli and Felipe Ezcurra.

The side will be captained by flank Pablo Matera, who took over this season from hooker Agustin Creevy.

The squad will travel to Sydney on August 30th, where they will continue their preparations and play a friendly with the Randwick Club. They will arrive at their Fukushima base in Japan on September 10th.

Saturday’s defeat for Argentina was their ninth in succession. They have won only eight of 41 Tests since the 2015 World Cup, when they were semi-finalists in England.

Argentina have been drawn in Pool C in Japan with England, France, United States and Tonga, and will open their campaign against the French at the Tokyo Stadium on September 21st.