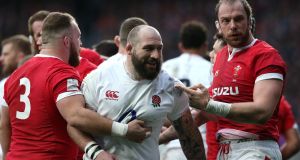 Joe Marler could be cited for grabbing Alun Wyn Jones by the testicles during England’s win over Wales. Photograph: Charlotte Wilson/Getty

Joe Marler could be cited and potentially face a ban after the England prop was caught on camera grabbing the genitals of Alun Wyn Jones during England’s Six Nations win over Wales.

Marler appeared to pinch and twist Jones’s penis in an off-the-ball incident just before half time in an apparent attempt to goad the Wales captain into reacting. The England forward could be cited and banned for between 12 weeks and four years for the act.

“Yeah. It’s interesting. What would you do?” Jones said after the match. “I’ve got 138 Tests for my country. If I react, I get a red card. It’s tough, isn’t it? Hopefully World Rugby have a look at it. Joe’s a good bloke, lots of things happen on a rugby field. It’s difficult as a captain these days because you can’t speak to a ref about anything, it feels.

“I look at the touch judge, obviously he didn’t see what happened and that’s fine. There’s a lot of footage that has been shown, it seems like a lot of supporters saw what happened. It’s very frustrating that we talk a lot about TMOs and footage reviews, yet there doesn’t seem to be a lot of it happening.”

Gareth Thomas, the former Wales international turned TV pundit who came out in 2009, joked at half-time that “It would never have happened in my day and I’m really upset about that – because if it had I would have never retired!”

Thomas later apologised for the remark, tweeting: “To the very small minority of people who were offended by my comment yesterday I apologise. I tried to find humour in a situation-that doesn’t mean I condone it, it means I wanted it to not be an issue. So don’t change the narrative to justify how you feel. Be kind.”

Andy Goode, the former Leicester and England fly-half, was critical of Thomas. “Imagine if someone touched another man or woman up in the workplace and then someone joked about it on TV,” Goode tweeted. “People have admiration for Gareth Thomas with what he’s been through and opened up about but I wonder if something similar was done in a homophobic way he’d joke about it?”

Examples of similar cases are rare, but in 2016 London Irish lock George Robson received a six-week suspension for the same offence. Six Nations organisers have until 48 hours after Saturday’s match ended to issue any citings. With England’s final match against Italy being postponed due to coronavirus, any bans will impact on the players’ clubs.

Marler is not the only England player to come out of the 33-30 victory in trouble, with Manu Tuilagi also potentially facing a ban for a dangerous tackle on George North which resulted in the centre being shown a red card. Tuilagi must appear before a disciplinary hearing - most likely on Tuesday. - Guardian