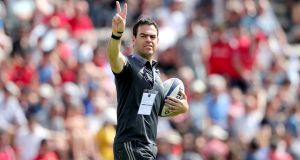 Johann van Graan: “For us it’s not about the rest of the season, it’s only about Saturday. That’s all we’re focused on.” Photograph: Dan Sheridan/Inpho

Johann van Graan is the first to acknowledge that from a situation just nine days ago when they were in line to bid for honours on two fronts, their season will end around teatime next Saturday if they don’t take care of Edinburgh.

But if there is pressure around their training base at University of Limerick this week, it is well disguised by van Graan as his men as they prepare for a Pro14 quarter-final against the surprise-packets of the season.

Munster were grateful for the runout against Ulster at the weekend when a good second-half display secured a 24-24 draw. But while van Graan has been in Limerick just five months, the start to their week remains the same every Monday, regardless of the result.

“When you’re the head coach you take all the responsibility. I’m just taking it day by day, you know my motto, start at zero at the start of every single week.

“The brilliant thing is you’ve got a coaching staff and a management team around you and some quality players. The head coach in my opinion always takes the responsibility and it’s nice to have players and coaches and management who also take responsibility for their areas on a weekend when it doesn’t go that well.

“I’ve enjoyed it. That’s why I came here, to develop and to be better and to hopefully be part of a team that’s very successful this year and hopefully in the years to come. So, I’ve enjoyed every single minute of it.

“I think the thing about being a coach, your highs are very high and your lows are very low, it’s also sometimes a very lonely place. But that’s why you coach and there’s no better feeling than your team going out like that second half on Saturday and you see them fighting for every single minute.”

They will need to do that at Thomond Park on Saturday against Richard Cockerill’s flying Scotsmen, who have won eight out of their last nine Pro14 games, or else a season which promised so much less than a fortnight ago will fizzle out and the hunt for a first trophy since 2011 will be extended for another year.

A win on Saturday will set up a semi-final showdown with Leinster two weeks later but that’s not something occupying van Graan’s thoughts.

“Certainly, we’ve got a plan and we try and execute that as best we can. For us it’s not about the rest of the season, it’s only about Saturday. That’s all we’re focused on, Saturday at a quarter past three.”

The South African, who will be without injured tighthead prop John Ryan but is hopeful that hooker Niall Scannell and perhaps centre Jaco Taute will recover, said he has not been surprised by the quality shown by Edinburgh this season and is in no doubt about the task they face.

“Knockout games, like every game of rugby, are funny things. Pressure’s a funny thing, so from our side we hope we start well and apply some pressure and we hope we can put some points on the board.

“Hopefully it will count in our advantage. Once it gets into the last 20 minutes and maybe scores are close, who knows what might happen. So very difficult to predict, all I can say is it’s a quality side that I respect, I respect their coach.

“I’ve said it once before with Jordan Larmour’s try on December 26, the Leinster try, you’ve also got to give credit and all credit to Edinburgh. They’ve come from my perception, I won’t say from nowhere but nobody’s seen them coming and a lot of guys still don’t see them but they are a red-hot team, playing some fantastic rugby.”