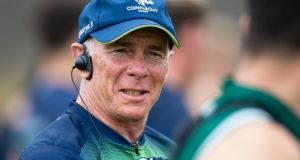 Connacht head coach Andy Friend has been impressed with how his side have been preparing for the resumption of action. Photograph: Inpho/Connacht Rugby

Unable to qualify for the Pro 14 semi-finals, Connacht are still intent on finishing this season with a flourish when facing Irish rivals Ulster and Munster in the final two fixtures.

Heading into the sixth week since returning from lockdown, Connacht coach Andy Friend says the squad’s focus will turn to the Ulster interprovincial next week as rugby makes a gradual return to normal.

Although the two interpros have the feel of a pre-season, Friend says they are “not throwaway games”, but a real test of his new-look squad, which boasts 12 additions.

“They are very important because it is a new squad, albeit it’s the tail end of last season,” he says. “We’ve got 12 new bodies here who want to impress, others coming in who want to make sure they stay ahead of them, and Andy Farrell watching, so there is a lot on these.”

Friend says there is now great hunger in his squad after four months out of action.

“A lot of players have used that time really well to allow their bodies to recover and then build again. We have seen players come back in great shape, lean muscle mass increase has been incredible. They are coming back feeling good, so the body has got better, and with that the mind has got better, and then the hunger to get back in.”

Although uncertainty remains how the new season will look, Friend believes he now has a good mix of youth and experience with “genuine competition for every spot”.

“This first four weeks and now week five, has been all about us getting our big rocks in place – our attack, defence and set piece, and our game strategy. Next week we shall start to put stronger focus on the Ulster game.

“ So we’ve still some development, but we will head into the two fixtures having a fair indication of what our game structure is going to be and make some tweaks, but at this stage the focus has been on Connacht.”

“Oisín hasn’t trained, but Conor Oliver, Sam Arnold, Alex Wootten, and then the young blokes from the academy, have been great. Across the board we have a group of players hungry to get back. They’ve worked really hard, and I’ve never seen them in a better state to be honest.”