Gerry Thornley: Let’s hear it for Ireland, the Celts and the Pro14 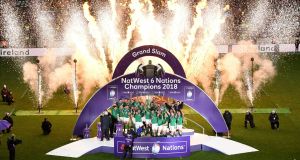 Crowning glory: Ireland celebrate with the Six Nations trophy and the Triple Crown after the victory over England at Twickenham Stadium. Photograph: Shaun Botterill/Getty Images

A memorable Six Nations for Ireland, and a landmark one in so many ways.

Remember the good old days when the Five Nations was ruled by an Anglo-French duopoly?

For much of the 1980s, 1990s and into the early Noughties they were the dominant duo. The organisers would schedule them to meet in the grand finale to Super Saturday and there was even talk of them breaking away to swim with the bigger fish from the Southern Hemisphere. The Celts weren’t good enough.

Well, a cursory glance at the final table for the 2018 Six Nations shows the Celtic nations in first, second and third place for the first time in 43 years. So let’s hear it again for the Pro14, who will also host three of the four European Champions Cup ties in a fortnight.

No doubt there’ll be bleating aplenty about the lack of relegation in the Pro14 compared to the Premiership and the Top 14. Perhaps there’ll even be suggestions of rejigging the format again. After all, Ireland winning a Grand Slam is bad enough, but a Celtic one-two-three can’t be right.

Of course, the margins are ridiculously fine at times, and remained so right up until last Saturday.

Scotland were indebted to Pascal Gauzerre not decreeing that their 78th minute maul had stopped twice before penalising Italy for collapsing, so enabling Greig Laidlaw to seal their win, and Wales only edged out France by a point. But for this alone, Wales and Scotland would have finished in the bottom half, and France and England in the top half.

Although Ireland’s runaway title gives the lie to this notion, the bottom line is that, thanks in the main to Scotland’s progress and France’s mini revival, the Six Nations has arguably never been more competitive.

Last season, four points separated second from fifth, this season it was five points. Accordingly, for the last couple of seasons, a good team has finished fifth, and that’s the way it’s going to be for the next few years most probably.

Undoubtedly, Ireland’s player management was a factor in this Grand Slam. Yes, it’s true that there were 13 players ruled out before a ball was kicked, and this included a couple of casualties who were on the Lions tour, Sean O’Brien and Jared Payne, as well as Jamie Heaslip.

Furthermore, they lost Josh van der Flier, Robbie Henshaw and Chris Farrell along the way. Indeed, but for injuries to the latter two we might not have seen Garry Ringrose, whose excellent reads and tackling along with his footwork and carrying threat actually improved Ireland’s defence.

Yet against that it’s worth noting 13 of the starting XV in the Stade de France pitched up again in the starting team in Twickenham in round five. Many of Ireland’s Lions have retained their freshness and fitness – one thinks of Cian Healy, Jack McGrath, Rory Best, Tadhg Furlong, Iain Henderson, Peter O’Mahony, CJ Stander, Conor Murray and Johnny Sexton – whereas so many of their English counterparts, especially Maro Itoje, Courtney Lawes, Dan Cole – have looked jaded.

This is hardly any wonder when you consider that Lawes played a pre-season friendly for Northampton whereas Ireland’s Lions didn’t make their seasonal reappearances until rounds four or five of the Pro14. Now Eddie Jones is suggesting England may rest their Lions from next summer’s tour to South Africa.

Even allowing for small margins, as England’s fall from first to fifth demonstrates, if you snooze you lose in this game, or if you stand still you’ll be rapidly overtaken. Whereas England have regressed, you could make a case that all five other teams have progressed this season.

Having risen to second in the world on the back of a dozen straight wins which has encompassed a Grand Slam, Ireland will be studied and targeted like never before in their history, beginning with their old mate from his Leinster days, Michael Cheika, in readiness for this summer’s three Test tour.

Much of what Ireland do well is predicated on the solid foundations laid at set-piece and particularly breakdown time, and it would be no surprise to see a twin openside attack on Ireland’s recycling excellence, comprising Michael Hooper and David Pocock, in the summer.

Having come up just short of a Test series win in South Africa in June 2016, targeting one away to Australia – or any of the big three Southern Hemisphere sides – for the first time since 1979 looks a natural next target for this Irish squad.

Hence, there has been no talk of resting Irish Lions from next June’s tour, even though there looks to be a strong case for giving Johnny Sexton and Rory Best a break with the November home series, featuring a game against New Zealand, the retention of their Six Nations title and the World Cup in Japan next year.

Sexton, Tadhg Furlong and Conor Murray are a world-class trio who would all be hard to replace, and so Ireland need to invest in the back-up between now and the World Cup. One could possibly add Best, for his leadership, and Rob Kearney in current form given Simon Zebo’s impending departure to Racing.

Otherwise, Ireland are developing strength-in-depth the like of which has never been seen before. There are three quality operators at loosehead and emerging options at hooker and tighthead. The stock of locks, which not so long ago looked relatively bare, is set to be further bolstered by Tadhg Beirne and Jean Kleyn.

Leinster and Munster have a conveyor belt of backrowers and far from being the barren dessert we feared post Brian O’Driscoll and Gordon D’Arcy, midfield is plentiful, witness three standout ‘13s’ in successive games.

In all of this, a nod of thanks too to the the Leinster schools/academy/Irish Under-20 production line. Jacob Stockdale, James Ryan and Andrew Porter were all in the Under-20 team which beat New Zealand en route to the World Cup final less than two years ago. They expect to be winners and so far, that’s all they know for Ireland.

Ryan made his Test debut for Ireland before making his Leinster debut. The system is producing readymade internationals virtually straight out of the Under-20s.