Michael Watt: The man who unleashed a rugby monster 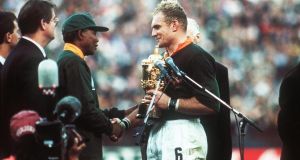 Twenty-five years ago this Wednesday, rugby union supplied the backdrop to one of the most famous images in history. Nelson Mandela and Francois Pienaar reached out to each other across the dais and the years, as their troubled nation came together to celebrate South Africa’s victory against New Zealand in the Rugby World Cup final. They have written books about it. They have made films.

Mandela had left his place in the box to present the trophy to the Springboks captain, clad in a team shirt bearing Pienaar’s No 6. Among the guests in said box was a New Zealander who had plenty of reason himself to celebrate, notwithstanding the defeat on the field of the All Blacks, Jonah Lomu et al.

Plenty of reason to celebrate, maybe, but Michael Watt is not wired up that way. “I can’t say I was feeling lousy,” concedes the 79-year-old from his home on Waiheke Island, east of Auckland. “It was a great pleasure to meet Mandela, a greater pleasure than securing the commercial deal the day before.”

If June 24th 1995 is forever enshrined as a landmark for humanity, the more significant event in rugby’s little world occurred on June 23rd. Louis Luyt, president of the South African union, called a press conference to announce the signing of a US$550m deal between Rupert Murdoch’s News Corporation and Sanzar, the newly formed alliance between the unions of South Africa, New Zealand and Australia. Rugby’s professional era was launched on the back of it.

Once again, Watt was lurking in the wings. His company, CSI, had just brokered the deal. At the time it was the biggest TV rights deal in sport history outside America, eclipsing the one he had helped broker three years earlier, which launched the Premier League. Until the 1980s, governing bodies had been surrendering the rights to broadcast their sports for next to nothing. Watt identified the fallacy and within 10 years had transformed global sport.

His first coup was to secure an uplift in the rights ABC in New York were paying for a highlights package of rugby league’s Challenge Cup from a few thousand dollars to a few hundred thousand. He knew then he was on to something. At the time, Mark McCormack was doing much the same for tennis and golf, but the rest of the sporting landscape lay open.

Watt set about signing up nearly every major governing body in football, cricket and both codes of rugby. The timely arrival on the scene of Murdoch and satellite TV moved his operations on to another level again.

But surely his biggest coup was that record-breaking deal for Sanzar. With subsequent options, the $550m eventually became more than $700m. Nearly a billion dollars for a cult sport that was still amateur.

Watt laughs when asked how he secured rugby such an outlandish windfall. “We just asked for it! The only science in such a deal is politicising and bullshit.”

The story handed down to us of that time is of a war between Murdoch and Kerry Packer, his rival media mogul, for the players’ signatures. The late Ross Turnbull, an Australia international turned lawyer, had convinced hundreds of players around the world to prepare to break away from the unions to launch Packer’s World Rugby Corporation, the mooted rebel vehicle by which they might all turn professional. It came down to Pienaar himself, a few weeks after the final, to decide which deal to sign.

According to Watt, there was no choice. “What Ross failed to realise was that Kerry didn’t really know what Ross was up to and probably couldn’t have cared less. He might have gone for it at the right price, but the right price ended up just south of a billion. We knew no one could top Uncle Rupert’s put-in. Turnbull was flying a kite.”

Pienaar led the ceremonial alignment of the players with the unions and Murdoch, but the real dealbreaker was Lomu, who was at the centre of a storm of speculation over his future. “Murdoch gave strict instructions. If we didn’t get Lomu, we didn’t get a deal. We guaranteed him Lomu before we had the right to. You do take the odd risk with something as big as this.”

The clash between eras was loud and jarring. Watt was also representing the unions of the north. He has fond memories of the Rugby Football Union’s secretary of the time, Dudley Wood, who encapsulated as much as anyone the ideals of the amateur era. “‘Watty,’ he said to me over lunch one day, ‘can you stop this [professionalism] quickly?’ I replied: ‘Well, not in the southern hemisphere.’ ‘Oh, I don’t care about them. It’s the north you’ve got to stop.’”

As much as Watt sympathises with the sensibility of those who defended the amateur way, he had unleashed a monster, which went on to power sport around the world. Watt sold CSI to “the Americans” in the late 90s and moved into the music business (he still co-owns Ronnie Scott’s jazz club in London’s Soho) and thence into philanthropy. But the repercussions of those wild times in the 90s continue to be felt.

Rugby feels them particularly, so suddenly and brutally ripped from its cradle of amateurism by that ground-breaking television deal. If the balance of power then was tilted decisively in favour of the southern unions, it has since aligned itself more or less according to economic clout, but everyone now waits anxiously for the next developments.

Watt senses a reckoning on the way. “Sport is very groovy. When a normally sober man approaches a beautiful woman giving him the eye, he is liable to make a mistake. I think some of the TV companies got a bit tied up in the rock and roll of it all. But this virus has given them the opportunity to rethink. People have suddenly got a new sense of values. Nobody wants to look as if they’re overpaying for something, whereas before they couldn’t care less. These companies will now be investigating their own largesse.”

The outlook for any sport reliant on television revenue, which is all of them, is precarious. Perhaps, sometime soon, a bright-eyed visionary will identify new sources of revenue. For now, though, those opened up by Michael Watt 25 years ago continue to prop up the pageant we had come to take for granted. - Guardian