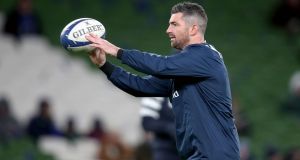 Rob Kearney has been given a short-term contract extension at Leinster. Photo: Bryan Keane/Inpho

Having passed their PCR testing and all required screening, the Leinster squad underwent individual fitness tests under the watchful eye of their strength and conditioning staff on Monday before beginning what Leo Cullen described as the “baby steps” in their nine-week run-in to a proposed meeting with Munster on August 22nd.

“The big thing is to get into the work flow and see what that’s going to be like,” said Cullen. “We’re in very, very small groups at the moment. Depending on forwards and backs, it’s five, six and seven in terms of players, so we’ve eight groups. That will get built up next week and more than likely become four groups.

“We’re changing in line with government guidelines as well and the IRFU are in communication there all the time, so we’re being very much guided by that, trying to make sure the environment is as safe as possible.

“All the various different monitoring and screening that needs to take place is going to be important for us so if something were to happen we’re able to shut things down quite quickly.

“We’re just taking it step by step – baby steps at the moment – and then as we get closer to playing games we can start to ramp up a bit closer to what a game is going to look like in the lead-in to the start date of August 22nd.

“We do have some time to be slow and gradual but on the flip side it won’t be too long before it comes around as well so we’re all very excited about that prospect.”

Leinster will give a squad update this morning although it is understood that Rob Kearney and Fergus McFadden have been given short-term contract extensions until the provisionally revised end to the 2019-20 season in mid-October.

The contracts of both players were set to expire on July 1st, and while McFadden has announced his intention to retire, the 34-year-old Kearney would ideally like to continue playing for another season or two but, in this decidedly uncertain market, knows that this may not be possible. It’s also understood that James Lowe and Jamison Gibson-Park returned to New Zealand during the lockdown.

Leinster are estimated to have lost €8 million due to the coronavirus pandemic, half of which was the result of cancelling their season tickets, and a resumption will be a timely fillip for all concerned, even if those end of August Guinness Pro14 derbies against Munster and Ulster at the Aviva Stadium are due to be held behind closed doors.

“Sport in general has had its significant challenges during this period,” Cullen told the Leinster website. “Slowly but surely we’re getting there. It’s nice to see other sports back up and running to various different levels. You can see the soccer in the UK and it’s been great seeing Super Rugby (in New Zealand) and with crowds, so that’s the opposite ends of the spectrum, seeing crowds in those games going off well.

“I understand the situation in New Zealand is different in terms of public health but it’s important that we are trying to operate in a very safe environment and hopefully the country stays on the current trajectory in terms of the numbers of cases, which is coming down all the time.”