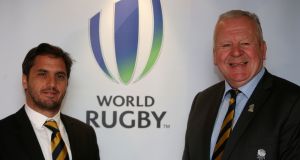 There have been suggestions from within World Rugby that extra internationals could be scheduled in October along with unplayed fixtures from the 2020 Six Nations championship. Photograph: PA

European rugby’s governing body has told World Rugby it intends to stage the Champions Cup final in October and says it is “unacceptable” to shoehorn extra autumn Tests into the calendar on weekends reserved for top-level club rugby when the sport resumes in the wake of the coronavirus pandemic.

There have been suggestions from within World Rugby that, in the likely event of this year’s July Tests not proceeding, extra internationals could be scheduled in October along with unplayed fixtures from the 2020 Six Nations championship. France’s Bernard Laporte, who is running for election as World Rugby’s vice-chairman, has also proposed a club World Cup which would effectively kill off Europe’s elite cross-border club competition, an idea later described as “a misunderstanding” by Bill Beaumont, World Rugby’s chairman.

European Professional Club Rugby, however, has stressed it is looking at staging the closing stages of its tournaments in mid-October on the weekends allocated for the first two rounds of the 2020-21 campaign and is calling for proper consultation with its leading officials. “We absolutely do not accept a schedule of international rugby in October,” said Simon Halliday, EPCR’s chairman. “That directly clashes with us and we are informing World Rugby we fully intend to use our October window if we need it. We could play our semis and finals on those two weekends or, alternatively, just use one of them for the final and try and find two other dates in August and September for the quarters and semis.”

Uncertainty clearly still surrounds the precise date when a resumption of rugby in Europe will be practicable but EPCR has strongly denied whispers from Ireland that the 2019-20 season might be curtailed early. “When you have club tournaments locked into multi-year contracts with partners and broadcasters, which is the lifeblood of the game, you can’t just cancel everything. If we don’t do what we are contracted to do, there are serious ramifications,” said Halliday.

“We can’t be bailed out by World Rugby, we don’t have that luxury. But we’re all connected, we’re all part of the same game. The value of our tournament, the Premiership, the Pro14 and the Top 14, collectively, is close to a billion pounds. Before people start saying what is valuable, it constitutes a very large – and increasing – percentage of the world’s rugby revenue. Significant investment has been made in European rugby.”

The organisers have indicated they would, if necessary, be prepared to stage major knockout games, such as quarter-finals involving Exeter v Northampton and Leinster v Saracens, behind closed doors. In terms of qualification for next season, leeway may also be given to clubs, such as Toulouse, who sit just outside the European qualification places domestically with the Top 14 regular season having been halted. “If our finals do end up being played in October we would then look at the following season and operate a different format to allow for the exceptional difficulties encountered this season,” said Halliday.

The former England centre is also adamant any new playing calendar must prioritise the players’ welfare, both on and off the field, and is urging all rugby’s stakeholders to come together at a time of significant global upheaval and human suffering. “We’re in times of real crisis here and we are not oblivious to worst-case scenarios. None of us entirely knows what will happen but everyone’s position in the game has to be respected. You’ve got to include the clubs and provinces of Europe at the heart of the conversation.” - Guardian