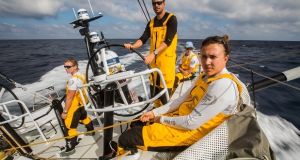 Annalise Murphy on board Turn the Tide on Plastic during Stage One of the Volvo Ocean Race from Alicante to Lisbon. Photograph: Jen Edney/Volvo Ocean Race

We’re somewhere in the Atlantic and lying mid-fleet on our way to Lisbon via Madeira on Stage One of the Volvo Ocean Race.

It’s a little less windy now, so we’re a little bit drier after the fire-hosing we got after starting the race from Alicante on Sunday afternoon, but that means we’re all salt-encrusted even after a couple of days at sea.

And this is still only a short stage of just 1,450 nautical miles that should finish sometime at the weekend.

Within two days we’ll slingshot around Porto Santo, avoiding Madeira’s main island that casts a huge wind shadow deep into the Atlantic, before the final sprint to the finishing line.

Depending on how fast or slow the fleet is, the organisers may vary the course a little to keep the leg tight; we have 6,500 nautical miles to prepare for in two weeks’ time when we race to Cape Town.

On board Turn the Tide On Plastics – our 65foot stripped-down racing yacht that is identical to the six other entries – we had a pretty full-on start with a good in-port stage around the “windward-leeward” spectator-friendly course off Alicante.

Almost too friendly as we came within a metre of crashing into a series of large spectator boats with cheering race fans who might not have realised just how close we all came to colliding.

Our skipper Dee Caffari did a great job of avoiding them while keeping our speed on, so thankfully no drama in the end.

It must have looked pretty exciting too for Mum and Dad who were on board the starting committee-boat with Bill O’Hara, who is the principal race officer for the whole event.

We had a lovely meal out with my aunts and uncle on Saturday night – my last proper food before the full freeze-dried diet kicked in.

Since getting into the open waters of the Med and now the Atlantic, we’re still within sight of Dongfeng (Charle Caudrellier) Scallywag (David Witt) and Brunel (Bouwe Bekking).

It’s pretty exciting to be within sight of three other boats: good to see them and good to learn off them too.

In terms of performance we’re basically trying to make the boat go as fast as possible, and it really helps seeing the other boats around as we can see the differences as we change things and experiment with small differences in settings and sail trim.

It’s really easy when you’re sailing alone to think you’re going fast but with other boats around you can tell and be more certain.

We’re in a full watch system but it is still very flexible as we’ve been gybing (altering course) almost every hour so anyone off-watch is needed to give a hand with the manoeuvre. This involves the most physically demanding task of shifting and re-stacking tonnes of sails, gear, food and other equipment to the “high-side” of the boat.

By shifting this weight the boat is better balanced and leverages more power from the sails and adds to our boat speed.

The result is that there’s very little sleeping on board. This was especially the case as we sailed through the narrow gap of the Strait of Gibraltar.

The gap is less than eight nautical miles wide, but this is even smaller for the race course as it has to avoid the shipping lanes that run for 20 miles.

We passed through this one-mile wide strip on the Spanish side and gybed just south of Tarifa at sunset on Monday evening, though at over 20 knots we were too busy trying to improve on fifth place to enjoy the sights.

But I’ve no trouble sleeping when I do get a chance. I’d say I’ve only had a couple of hours in the first 48 hours, and while you do get used to it, you get so tired on deck that every time you do come off watch and get a chance to lie down, you pass out so that’s pretty good!

We’ve been consistently up around fifth or fourth place at times so far, which is really encouraging for us. Our goal is to make the podium during the race, and we’re under no illusions about the depth of talent in many of the other boats around us.

Turn the Tide On Plastic has the most under-30s of any boat in the race, plus a 50:50 male-female crew split. Dee’s hope is that a good showing in this edition of the Volvo Ocean Race will end the male bias that exists in the big-boat end of sailing. Hopefully other race organisers will follow the Volvo organisers’ example by introducing similar measures to encourage balance in their crews.

In terms of my expectations, having switched from Olympic campaign to ocean racing, it’s better than I thought it was going to be, and I’m really enjoying it. When the boat is fully powered up in 30 knots of wind it’s pretty amazing.

It’s tough and you get tired, but it’s really enjoyable and great to be figuring out ways to make the boat go faster all the time.

I’m pretty sick of eating the free-dried food all the time but apart from that life on board is good.

I’m also pretty lucky to have escaped seasickness as I was worried that it might affect me. It was quite rough but after 24 hours I knew that I’d be okay, and that I had adjusted to the movement, so I’m relieved

And I’m not missing my Laser Radial, not for the moment anyway!