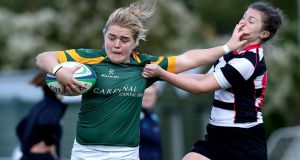 Shirley Corcoran, president of Railway Union RFC, has stated the club’s reason for seeking inclusion on the Leinster executive committee is to influence the future direction of women’s rugby and not an increase in ticket allocation.

A men’s AIL division 1A club can get up to 415 tickets for every international at the Aviva Stadium. Currently, Railway get 105 tickets, five due to their women’s team and 100 because their men play in Leinster league Division 2A.

“This has never been about tickets,” said Corcoran. “From our point of view, we have always been consistent about what we want: a seat at the table that will allow us to influence the game in Leinster.”

Railway Union have drafted a motion for the Leinster agm in May seeking bylaw 7.1 – “a senior club is a club participating in the AIL” – includes the women’s All-Ireland League.

“We believe that choosing to recognise senior status of a club based solely on where their Men’s 1st XV play, and by choosing to recognise the Men’s AIL and not the Women’s AIL as basis for senior status, discriminates on gender and that such an interpretation goes against Irish Rugby’s values, in particular ‘respect,’ ‘integrity’ and ‘inclusivity,’” Corcoran stated in a letter sent Thursday to all Leinster clubs and schools.

Last January IRFU chief executive Philip Browne told the Joint Committee on Transport, Tourism and Sport, when the possibility of gender quotas for national sporting bodies was raised, that it is “difficult to find suitably qualified female candidates with the accumulated rugby wisdom and skill sets to fill such quotas without retreating towards tokenism.”

Browne clarified that “the skill sets I was referring to were actually rugby skill sets. Understanding the game, understanding how clubs work, how they fit within the structure of Irish rugby. One of the key issues that we have is that we have very few women actually involved in coaching or in administration.”

Corcoran disagrees. “There’s a lot of women out there who have knowledge on the game in general, not just the women’s game, who have been involved in women’s rugby over many years.

Railway Union have considered a legal case should they fail to get a two thirds majority to carry their motion in May.

“It was suggested that we would have a good case,” said Corcoran, “but I don’t think it is in the interest of the sport. I am still hopeful the executive would see sense here.”

The Leinster Branch dispute the suggestion that their executive can clarify the bylaw and grant Railway senior status with a simple majority.

“There is a well-established process in Leinster Rugby for clubs to amend bylaws or regulations of the Leinster Branch,” said a Leinster spokesman. “Leinster has advocated that Railway Union should embrace the process, has encouraged the club to apply in this manner and has offered full assistance to the officers of the club to facilitate this.

“That encouragement and support remains in place and hopefully Railway Union will avail of this to seek to realise its objective.”