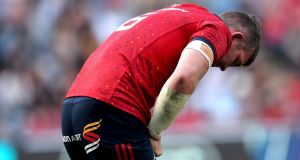 Munster’s Peter O’Mahony during the second half. Photograph: James Crombie/Inpho

They might not care to admit it to themselves, but Munster faced a gulf in class at the Ricoh Arena. The expressions on the faces of the players in the sunlight of Coventry spoke of a masterclass from outhalf Owen Farrell and a relentless Saracens pack that never took a step back.

Despite some first half handling errors, Saracens controlled and absolutely deserved their Heineken Champions Cup final place against Leinster or Toulouse. There can be no gripes from Munster.

It disappointingly leaves Munster with 10 semi-final defeats from 14 – and a seventh in succession - and flanker Peter O’Mahony in particular wondering when he will ever snap that streak having played in four of Munster’s last five.

Saracens had the perfect start when Munster fullback Mike Haley mistimed the first high ball of the game in the opening exchanges. It resulted in an early penalty for the English side which Farrell converted for 3-0. That, however, was short-lived as Mako Vunipola was penalised seven minutes later for illegally poaching and Munster’s Tyler Bleyendaal made it 3-3 from the tee.

Saracens were enjoying the better of territory and possession, pushing Munster into a first half game of fierce tackling with Haley putting David Strettle, a late change for the injured Sean Maitland, into touch on 25 minutes.

Such was the ferocity and pressure on Munster there were always going to be errors as Saracens turned up the tempo, Farrell probing with grubbers and high balls but never really managing to release the wrecking ball number eight, Billy Vunipola, into destructive mode.

Vunipola was subject to constant booing from the Munster fans whenever he took on the ball in the wake of his social media post that “man was made for woman to procreate that was the goal no?” He had also liked a post from Australia’s Israel Folau that stated “hell awaits” homosexuals.

Farrell stepped up to the tee again on 17 minutes and 27 minutes with two more penalties and 9-3 after 27 minutes.

But as much as Munster were durable with their width in defence and aggressive tackling across the pitch, they had the confidence to stay with Saracens. When Maro Itoje went off his feet Bleyendaal made it 9-6 before Conor Murray landed a long range kick from just inside the Saracen’s half.

That drew a huge cheer from a Munster crowd, which greatly outnumbered Saracens supporters in a two thirds full Ricoh Arena.

At 9-9 it looked as though the sides would go into the break all-square, although Saracens had enjoyed 61 per cent of territory. But the England play maker again rounded his kicking figures to four from four and 12-9 at half time, Munster more holding than contending.

Then in a seven minute phase between 43 minutes and 47 minutes the semi-final entirely fell away from Munster. John Ryan committed in defence, leaving a gap that Michael Rhodes galloped in to close to the Munster line and he was over for the first try of the match before the covering defence could make a tackle.

Farrell converted and wasn’t long in adding another penalty for an unassailable 22-9. Despite JJ Hanrahan coming in for Bleyendaal for more go forward play, Farrell added another for 25-9 and Munster’s race was run.

While Darren Sweetnam turned on his burners and dotted down on the right corner for Hanrahan to convert for 25-16, it was Saracens that reacted more positively, the former champions scoring their second try when David Strettle’s jinky run drew the Munster defence and Vunipola found space to barge over, Farrell fittingly kicking the last points of the match.