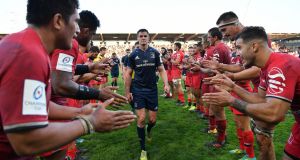 A dejected Johnny Sexton leads the team off the field following Leinster’s defeat by Toulouse at Stade Ernest-Wallon in Toulouse in October. Photograph: Dan Mullan/Getty

Quarter-final weekend in the Heineken Champions Cup delivered in spades, and not least in throwing up the most garlanded last four in the tournament’s history. Pedigree counts indeed.

It also tells us much about the quality of this semi-final line-up that not only have the quartet of Leinster, Toulouse, Saracens and Munster harvested more than half of the previous 23 European Cups between them, but all four are very much still in the running for the double.

Indeed, Leinster (runaway leaders of Conference B) and Toulouse (ditto in the Top 14), along with Saracens, second in the Premiership, are all nailed on semi-finalists in their respective leagues, and Munster could well do likewise.

Take the European Champions League. Of all the teams to break the stranglehold of the major football leagues, the latest batch of Ajax youngsters were the ones to fearlessly crack this season’s semi-finals, which surely has something to do with their illustrious past in the competition.

Similarly, Munster and Toulouse have to go back a little further than Saracens and Leinster to recall their glory days, but it’s also no coincidence that they’re back again, with Munster seeking to end a sequence of six losing semi-finals since their 2008 triumph.

Munster’s longing to regain this cherished piece of silverware is therefore the most acute, but that second title and the cup triumph two years earlier are still vivid part of the province’s folklore.

Peter O’Mahony, Conor Murray and Keith Earls were all in the Millennium Stadium crowd in Cardiff in 2006 when they reached their Holy Grail against Biarritz. Two years later Murray was one of those in Limerick’s O’Connell Street watching the drama unfold against Toulouse and this week he admitted that winning the Heineken Cup “means the world to me”.

Earls was an unused sub in the final against Toulouse and thus doesn’t regard it as a true winner’s medal but, alas, Munster’s match-winner in the quarter-final away to Edinburgh when scoring two tries, has been ruled out of today’s first semi-final against Saracens in Coventry’s Ricoh Arena with a thigh injury. It’s a cruel blow for both player and province.

Munster’s back three is thus made up of Mike Haley and Darren Sweetnam, who along with Jack O’Donoghue are the only players to keep their places from last week’s win away to Benetton, along with Andrew Conway.

Haley missed the quarter-final through illness, when Conway was at fullback, with Sweetnam called in on the morning of the game. As expected, the only other change from the starting XV against Edinburgh sees Tyler Bleyendaal replace the hamstrung Joey Carbery, as he did to telling effect in the 35th minute of that game.

By contrast, Saracens welcome back several front-liners in making ten changes from the team which lost away to Bristol last week and, on paper, look even stronger than the outfit which routed Glasgow 56-27 in the quarter-finals.

Owen Farrell, who missed that game and last week, is back, meaning Alex Goode reverts to fullback and Liam Williams to wing, while captain and centre Brad Barritt has recovered from the ankle injury he sustained in that game.

Furthermore world-class Lions loosehead Mako Vunipola returns for his first game since January, and is named in a pack also featuring his brother Billy. Even experienced scrumhalf Richard Wigglesworth is restored to the bench after a lengthy absence.

Meanwhile, as expected, Johnny Sexton is restored for his first outing since the Six Nations, and his first Leinster appearance of the calendar year, to lead them against fellow four-time winners Toulouse at the Aviva Stadium tomorrow (kick-off 3.15pm and live on Virgin Media TV, Channel 4 and BT Sport).

Sexton is one of nine changes from the side beaten 39-24 by Glasgow last week, and one of five from the starting XV which helped secure that hard-earned 21-18 quarter-final win over Ulster at the Aviva. Robbie Henshaw and Devin Toner, who returned last week, start, as do Rob Kearney and James Lowe, with Jamison Gibson-Park ruled out.

Scott Fardy is thus on the bench where, in the absence of the injured Andrew Porter, Michael Bent is preferred to Jack McGrath.

As anticipated too, Toulouse have opted to start the brilliant Antoine Dupont at outhalf in making just three changes from the side which beat Clermont 47-44 last week.

Pita Ahki’s physicality is preferred to Romain Ntamack in midfield, while loosehead Clément Castets is restored, as is Joe Tekori to the back row. A beefy pack is backed up by a 6-2 split on the bench.

The bookies’ odds point to a Saracens-Leinster final, in other words a meeting between the two teams who have won the last three cups. Funnily, this is the fifth time both Leinster and Munster have reached the semi-finals in opposite sides of the draw, and yet there seems to have been less talk of a potential meeting in the final in Newcastle.

Most likely that is due to Ireland’s somewhat deflating Six Nations campaign, along with recognition of the huge task facing Munster and concerns around Leinster’s form, their lack of cohesion in recent weeks, and the rustiness of several key players, not to mention the threat posed by a Toulouse team which has lost only twice in 23 games.

On the first three occasions both Irish provinces reached the semi-finals, in 2003, 2010 and 2017, they were both eliminated, while last season Leinster progressed but Munster lost to Racing.

As things stand, Leinster and Munster have met for the last time this season, yet they could conceivably still face each other twice more, with another Pro14 semi-final, or even a final, also still possible.

If the truth be told, with so much pedigree in the last four, no permutation would be a surprise. The odds do indeed point to a Saracens-Leinster decider, but perhaps this time a second all-Irish final, and first between Leinster and Munster, will sneak up on us.

* In the event of either semi-final finishing level after 80 minutes, two ten-minute periods of extra time will be played. After this, if the teams are still tied, the winners will be determined by a place-kicking competition involving three nominated kickers from each side.