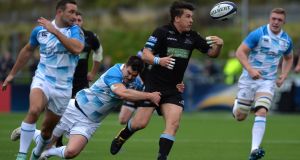 “Brutality is a massive part of the game over here so we need to go through the middle of sides,” revealed Glasgow’s Kiwi coach Dave Rennie, “and we need to be able to defend [against] teams who can do that.”

These Warriors are not yet built to withstand the ravages inflicted by a continental campaign. Leinster, like Exeter before them, cut clean through their guts.

The Pro 14 cannot prepare a man for the beast Leinster transform into under full Euro moon. Glasgow at pace remain a delightful sight but, once the visitors set-piece claws were unleashed, a bonus point begged to be bagged.

That and Johnny Sexton’s ratty yet methodical approach provided the abiding narrative.

Rennie was not helped by four players being forced off with gruesome head injuries. Only one, Tim Swinson, required the HIA, which he passed, as the other three – Ryan Wilson, Callum Gibbins and Peter Horne – were cleaned out.

Sexton avoided concussive damage but his innate desire to carry to the precipice of loaded impact, always searching for the perfect pass, will forever threaten his wellbeing.

“It’s a credit to how brave he is,” said the most brutal of them all, Rhys Ruddock. “He could get hit once or twice on the edge just as he releases the ball but it won’t stop him playing to the line, playing the right option he’ll still go and do that. That takes bravery.”

Departing the fray after 68 compelling minutes this Lions legend was applauded and booed in fluctuating measure by the 7,351 crowd. Some, perhaps, were annoyed by Sexton’s running argument with the late hitting Leonardo Sarto or for admonishing the officials, when proving his superior knowledge of new rules, with the rest presumably frustrated by his utter dominance.

The pack, superbly led by Ruddock and the excellent Scott Fardy, engineered mouth-watering home and away battles with the equally uncompromising English champions Exeter in December.

This task was halfway done by the turn. Cian Healy shrugged off an early knock to rumble over for two tries. The unbroken prop recently clocked up 30 years.

Sarto, the rangy Italian winger, was the latest to heave a shoulder into Sexton, prompting some ground grappling and harsh words as the touch judge examined his boot laces.

His disgust was followed by relentless excellence.

Not before a Glasgow magic trick. Finn Russell seemed certain to launch Stuart Hogg at the gainline but instead the outhalf took a loop pass and grubbered down the tramline. Tommy Seymour shinned the ball infield where Hogg continued his gallop with a deft placement sending Scotstoun into raptures.

Russell’s conversion made it 10-3 with 15 minutes played. That was as good as they got. They were not helped by losing Wilson for 14 minutes with a blood injury that required heavy strapping on his knee. The Warriors captain returned just as Healy was being driven over for his first try.

This came from a messy kicking exchange between Sexton and Hogg. Sexton missed touch – actually, he didn’t - but Hogg’s siege gun response went dead to give Leinster a scrum eight metres from the try line. It took another lineout drive and big carry by Jack Conan before Healy touched down.

“I understand the ruling,” said Leo Cullen of the officials error in not judging Sexton’s penalty to have gone out of play. “When the ball is over the line the ball is out and it doesn’t matter where the person’s feet are, and that’s a new directive that was brought in so I can understand Johnny’s frustrations as I had similar frustrations from where I was sitting.”

From Russell’s restart Noel Reid ran at Wilson who clashed heads with Swinson in the resulting tackle. Twice Wilson sought equilibrium, twice the invisible waves rolled over him, prompting referee Jerome Garces to order a replacement. Swinson passed his HIA and returned.

Sexton ignored another three points, trusting his pack, as Healy’s mauled try saw them disappear with a 17-10 lead after the outhalf duffed conversion over the crossbar.

Sexton’s control off the entire game was confirmed when looping and strolling under the posts early in the second half. The delicate link coming from Fardy.

As a direct result Sam Johnson got a chance to alter what seemed an inevitable course of this contest. The centre brushed past Sexton, racing out of his 22 but the Ireland outhalf, with complete disregard for his hamstrings, hunted him down. Atonement came with a perfectly timed tackle resulting in Johnson passing into thin air. Unsurprisingly, the medics were straight over and while Sexton walked away, Ross Byrne stripped off on the touchline.

But Russell made it a one score game when Garces punished Leavy for barrelling through a ruck so no way Sexton was leaving. Byrne was handed a winter coat to keep warm. Sure enough another loop yielded three points when Horne was caught, by the TMO, tackling Sexton off the ball.

The bonus point came far easier than it ever should with Noel Reid latching onto Joey Carbery’s switch pass.