Eoghan Masterson and Matt Healy grab tries at the Sportsground 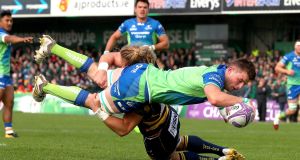 Connacht’s Eoghan Masterson scores a try despite the tackle of David Denton of Worcester Warriors during the Challenge Cup game at The Sportsground in Galway. Photograph: James Crombie/Inpho

Connacht grabbed control of pool five in the European Challenge Cup with a hard-earned victory over English Premiership side Worcester at the Galway Sportsground.

With a fierce westerly blowing down the pitch, which Worcester opted to play against in the first half, it proved an attritional opening 40 minutes.

Connacht looked lively in the opening quarter and grabbed an eighth minute try, but they were unable to kick on after that.

A solid scrum provided the platform for the first score, Eoghan Masterson taking control at the base before opting to go wide, and when fullback Tiernan O’Halloran made a superb break up the right wing, Darragh Leader did well to keep the momentum going before off-loading to the supporting Masterson who crashed over. Although Jack Carty missed the conversion, he added a penalty after 20 minutes to push Connacht into a an 8-0 lead.

Connacht continued to enjoy control both in territory and possession, but they were unable to make it count on the scoreboard despite creating chances. It gave Worcester more hope as they created one solid chance near the end of the half, big David Denton providing the momentum and fullback Chris Pennell coming close before a knock-on allowed Connacht to breathe again.

Worcester started the second half with the wind and intent, pushing themselves forward, but Connacht held firm until 51 minutes when the visitors lapped up loose ball, No 8 GJ van Velze taking advantage, Pennell finding a gap and Jono Adams finishing in the left corner, Jono Lance unable to convert the touchline kick.

Connacht, however, wrested control, and a chip through from Carty bounced perfectly for the on-running Matt Healy, who scored his third try in two games. Carty added the conversion to extend the lead to 15-5.

Worcester, however, grabbed the initiative seven minutes from full-time, opting for a penalty. Lance converted to leave just seven between the sides, ensuring the visitors returned to Sixways with what could be a valuable bonus point, while Connacht take control of the pool until their back-to-back meetings with Brive.