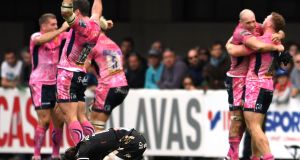 Exeter Chiefs made it back-to-back Champions Cup Pool 3 wins as they claimed a famous 27-24 victory away to French giants Montpellier.

Don Armand scored a try in each half while centre Ian Whitten also added a try as Gareth Steenson kicked three conversions and two penalties for the best European result in Exeter’s history.

Nemani Nadolo crossed twice for Montpellier and Joe Tomane and Benoit Paillaugue also added scores, but it was not enough to stop Rob Baxter’s men from celebrating.

The home side secured two points for scoring four tries and finishing within seven of Exeter, but it is the English outfit and Leinster who are both unbeaten in Pool Three.

Irish assistant referee Joy Neville became the first female official to be involved in a Champions Cup clash when the game kicked off, but it was not long before Montpellier moved ahead.

Australian centre Tomane was the scorer, hacking on a loose ball and making his way to the line. The score was awarded by the television match official who judged there to be no knock-on, but Ruan Pienaar was unable to add the extras.

Exeter were determined to attack and their approach paid off when Armand powered over from close range between the posts. Steenson converted, and the visitors’ impressive start continued.

An electric Henry Slade break put them on the front foot and with Thomas Waldrom in support, home fullback Jesse Mogg was yellow-carded for a deliberate knock-on.

To make matters worse for Montpellier, Mogg collided with Pienaar who had to be taken from the field on a stretcher wearing a neck brace. Steenson kicked the penalty.

Down to 14, Montpellier hit back. Their giant pack pounded away and the ball was spread left where Paillaugue dived over. There was still time too for Nadolo to finish acrobatically in the corner on the verge of the break and Paillaugue’s conversion put the home side 17-10 up.

Exeter could not have wished for a better start to the second half as Whitten smashed his way through following an impressive backs move and Steenson tied the scores with the extras.

A thrilling game continued with Nadolo crossing for his second and Montpellier’s bonus-point score with Paillaugue once again kicking the goal.

Buoyed by their bench and with Slade impressing, Armand then made it two for the day after Exeter withheld a pounding from the home pack. The try was a replica of Armand’s first and Steenson converted to make it 24-24. It left the game in the balance, but Exeter’s effort was remarkable with their replacement front row impressing.

Steenson controlled things expertly and after his pack secured a 72nd-minute penalty, the flyhalf did the rest to send Exeter’s impressive travelling support into dreamland.