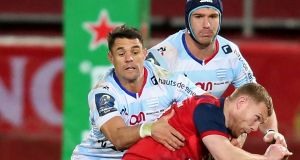 Dan Carter has done pretty much everything in the game. International rugby’s most prolific points scorer signed off his stellar test career with a man of the match performance in a winning World Cup final, he’s also a three-time World Player of the Year and has won six Tri Nations/Rugby Championships, four Super Rugby titles and a French Championship.

Along the way, he’s adorned pretty much every major ground in the world except, until last Saturday, Thomond Park. He missed last year’s meeting in Munster’s Limerick citadel, and was a non-playing member of the All Blacks squad in the stands when they played here in 2008 when Joe Rokocoko, another 35-year-old team-mate on Saturday, scored the late, match-winning try.

So, when Racing and Munster were drawn together again, he resolved to make sure that was one game he wouldn’t miss.

In the event, the great man just about made it, overcoming the calf injury which had sidelined him for six weeks to return for this game, and afterwards Ronan O’Gara applauded the way Carter led the team all week in their preparations. Winning a European Cup is about the only box he hasn’t ticked.

The pity for the game, if not for Munster, was that Carter was clearly affected by an accidental clash with Chris Farrell which left him wincing in pain and requiring heavy bandaging around his right knee. He soldiered on until the 52nd minute before being replaced in what may well be his final appearance at an Irish ground.

“Everyone thinks about the opposite number, but you rarely tackle him, you rarely come one-on-one with him, so it’s indifferent, but you are trying to raise your standards because it is Dan Carter.”

For others in the Racing squad, such as the 34-year-old Dimitri Szarzewski, it was also a first taste of Thomond, and the Parisians had clearly been made well aware as to what a prized scalp was on offer.

As was the case when an under-strength team fronted up here last January, their assistant coach, Ronan O’Gara had them well primed. “He just told us to show some character in what we did today,” said Yannick Nyanga, “because without character you can’t do anything here but I think with more strategy we could have won this game. What we showed was a good thing but it was not enough so we have to work it out and change some things.”

Munster may have lost their invincibility here but, that said, this was their 58th win in 62 games at Thomond Park, their only defeats in 22 European seasons being against Leicester in 2007 and 2014, Ulster in 2012, Clermont in 2014.

That’s some record and the urgings of the 22,054 assuredly contributed to passages of heroic defending when Racing were battering their line for extensive periods in the second quarter. The crowd were also with them in the third quarter and kept their nerve after a scoreless first hour.

Munster’s reputation was founded on sleeves-rolled-up wins such as this, although Keatley, who has also played for Leinster and Connacht, maintained, “There is something special about here in Thomond Park but also the other provinces, there is something special about Irish rugby when it comes down to cup rugby. I don’t know if it comes from schools, because schools is all cup rugby, so it is kind of in our blood all the way coming up. You make junior cup, you make senior cup, I don’t know if it is the cup mentality or what it is but I think, yeah, the other provinces are able to do it too.

“But when we are here in Thomond Park, sometimes we just know, you kinda get that feeling, even though it was nil all after 60 minutes, we still had that feeling we were in control and going to win.”

Keatley probably wouldn’t have been starting but for the neck injury Tyler Bleyendaal sustained last week, but he brought a calm, measured control to Munster’s game, mixing his game nicely and turning the screw on Racing with some pin-point touch-finders.

The 30-year-old has actually played more games, 54, in this competition than any of Munster’s match-day squad, and his experiences have taught him how to cope with the low moments in games better than he used to, such as the missed penalty from in front of the posts which should have pushed Munster 10-0 ahead.

But even that turned out to be a good one to miss. From the recycled 22-metre restart, Keatley found touch by the corner flag, and the ensuing pressure resulted in him going in at scrumhalf for Simon Zebo and Rory Scannell to give Andrew Conway sufficient space to stand up Albert VuliVuli and score in the corner.

Better still, and a tad illogically, Keatley tagged on the conversion from the right touchline to add to his previous one from the left touchline after Conor Murray’s breakthrough, charge-down try. Keatley revealed that Rassie Erasmus had reminded them at half-time that they had been close to a charge down on Maxime Machenaud in the first half, although Murray still had to display his innate footballing skills to pick up the greasy pill on the run and score.

All in all, Keatley appears to be in a good place. “Yes, I am just enjoying myself. We just had a baby girl [Beth] there four weeks ago. It just puts a lot of things into perspective and even with Anthony[Foley] passing away last year, you are kinda like, rugby is so important, don’t get me wrong, but then sometimes you just have to take yourself away from it, and you kinda go, ‘what is more important in life?’”

Replacements: D Szarzewski for Chat, V Afatia for Ben Arous, C Johnston for Tameifuna, R Tales for Carter (all 52 mins), A VuliVuli for Dupichot (57 mins), E Maka for Nyanga, T Iribaren for Machenaud (both 71 mins), B Chouzenoux for le Roux (all 71 mins).