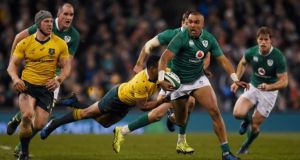 Australia will host Ireland in the first three-test rugby series between the countries in June 2018, the country’s rugby union announced on a visit by President Michael D Higgins to its base in Sydney.

The Irish will play three matches against the Wallabies during next year’s tour: at Suncorp Stadium in Brisbane on June 9th; AAMI in Melbourne on June 16th; and at Allianz Stadium in Sydney on June 23rd.

Ireland, currently ranked fourth in the world, won the two most recent encounters between the countries by a three-point margin, in 2014 and 2016, both in Dublin, but have not played a test in Australia since 2010.

“With our two nations currently ranked three and four in the world, this is sure to be a hard-fought test match series,” said Australian Rugby Union (ARU) chairman Cameron Clyne at a lunch attended by Mr Higgins at the organisation’s new headquarters during the President’s State visit to Australia.

The Irish team has played two test matches on tour against the Wallabies on four previous occasions, in 1979, 1994, 1999 and 2003, but it has never contested the Lansdowne Cup - the perpetual trophy they compete for in matches against each other - over three tests.

“The rivalry between the two nations has grown enormously in recent years with some memorable encounters,” said Bill Pulver, chief executive of the Australian Rugby Union.

“With a huge number of Irish expats living in Australia, Ireland will enjoy strong support when they are here for matches in Brisbane, Melbourne and Sydney.”

Teeing up the test series, Mr Clyne pointed to Ireland’s notable successes on the field in 2016, pointing out that the Irish were the only team to claim victory over Australia, New Zealand, England and South Africa.

“We particularly enjoyed the magnificent scenes from Soldier Field in Chicago when 50,000 national Irish fans cheered on their famous team to victory over the All Blacks,” he said.

Australia and Ireland have faced each other 33 times in test matches with the Wallabies leading with 21 victories to Ireland’s 11. They drew once during the test match at Croke Park in Dublin in 2009.

The Wallabies have not lost to the Irish at home since 1979.

“Games involving Ireland and Australia are always great occasions and this will be an exciting tour,” said Philip Browne, chief executive of the IRFU.

“The Irish diaspora are renowned for supporting the Irish team when they visit their new homes so we know there will be a party atmosphere to match the world-class rugby.”

Addressing executives from the ARU and members of the Irish community at the lunch, Mr Higgins described the Lansdowne Cup as “a very fine expression of the relations between our two countries.”