Tadhg ready to go the extra Furlong for Leinster

After a summer with the Lions, Furlong slotting back into the groove with Leinster 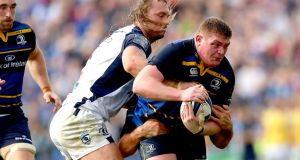 Tadhg Furlong: “I still haven’t won anything. That is one of the things that motivate you to keep performing.”

“I am the sort of person that I probably moan or am never happy with stuff,” admits Tadhg Furlong.

He says it with a smile and there is reason for that. After a summer of being wrapped in cotton wool following the Lions tour, Furlong is gathering momentum and filling the shirt that now belongs to him in the front row. But the tighthead prop is not there yet.

Leinster’s player management has always been carrot and stick. They hold them back for their own well being, then open the gate and whistle them on onto the paddock.

The built-in assumption is that it takes three or four matches to find the right tempo and have a real feel of the competitive fabric.

It’s a long ball game and Furlong sees the currency of playing well now. But he also understands the value of knowing there is more to come. It has become almost an art form, splicing front line players into a moving team.

“It was my third game of the season,” he says of the first pool win against Montpellier. “Probably not up to full match fitness or sharpness.

“The squad hasn’t had a massive amount of time together with everyone integrated back in. This is only our fourth deep week really. We’re getting there little-by-little. You can see those gradual improvements in the games we’ve played.”

A motivating factor moving towards the game against Glasgow in Scotstoun’s 4G pitch is that Furlong has not won anything yet in terms of trophies. But it is a lightly held concern. Being part of a team that always believes in the possibility of success imparts its own knowledge in how to win.

Furlong’s intentions are to kick on after the Lions. A pinnacle of sorts, but he cannot allow the personnel satisfaction of the summer become a staging post for self regard. There is, there has to be further gains after the Lions.

“A lot of times, you have to prove to yourself or look for areas in the game where you can improve,” he explains. “I am still very young for a tight-head prop. I still have a lot to learn in the game. Those sorts of things keep you motivated.

“I still haven’t won anything. That is one of the things that motivate you to keep performing. The strength in depth at tighthead this year is really good.

“Benty (Michael Bent) is playing out of his skin, scrummaging really well and Ports’ (Andrew Porter) is pushing hard as well. Those lads keep you on your toes.”

When he looks to the other groups he sees the two times winners Saracens setting the bench mark for excellence. He sees their class as much in how they play as their results.

So too does he look at Glasgow and know that they reached the knockout stages of the competition for the first time last season. Under coach Dave Rennie the team has built on the foundations laid by Gregor Townsend.

The outcome this week could also influence their meeting in the Pro14 game at the same venue on Friday, November 3rd. Bragging rights going into that match would help soften Glasgow’s cough for Leo Cullen.

“I thought the Exeter-Glasgow game was pretty good, wasn’t it? It was tit-for-tat,” says Furlong rhetorically. “It was tough for Glasgow, coming back from South Africa after a tough game over there.

“I think everyone is finding out how hard it is to win at the Cheetahs. To have that travel back and have that disruption to your week and then play away again at Exeter is a tough task. They (Glasgow) are still a quality, quality side.

“We haven’t won there in - what is it? - six years, something crazy like that?”

It is early season, he says. The younger players are showing he says. With Barry Daly on a streak and James Ryan taking the late phone call and stepping up, there is pride in what was achieved last week, he says.

But for Furlong, it is also personal. The summer gave him a measure of the level at which he can play and that must be respected even after three games.

“You have been there. You have that memory bank you can draw on,” he explains. “It gives you standards of yourself, where you can keep aiming for.”

Much the same as the Leinster team.