Garry Ringrose ruled out of November Tests by Leo Cullen 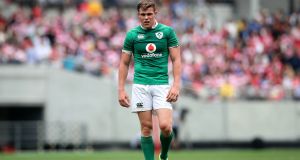 Garry Ringrose will not feature for Ireland in November. The 22-year-old centre, having undergone shoulder surgery last July, has been ruled out by Leinster coach Leo Cullen until December.

With Jared Payne also struggling with headaches, dating back to the British and Irish Lions tour of New Zealand, Robbie Henshaw is set to play outside centre against the Springboks on November 11th.

Ringrose’s recovery time frame was previously stated as four to five months, so it remains on track, but hopes he could make the Argentina Test on November 25th are fast receding.

“Garry is still a bit off so he is probably looking at the end of November,” said Cullen following victory over the Glasgow Warriors at Scotstoun where Leinster lost Josh van der Flier and Barry Daly to ankle injuries.

“It looks like Josh will struggle for this week,” said Cullen ahead of the Pro 14 match against Ulster in Belfast next Saturday.

Cullen must now navigate the province through the November window without club captain Isa Nacewa, who underwent ankle surgery last week, but Ringrose’s unavailability has a greater impact on the Irish midfield for next month’s tests against the South Africa, Fiji and the Pumas.

Despite missing out on Lions selection the Blackrock centre had become a guaranteed starter for Ireland, featuring throughout the Six Nations – with Payne at fullback – and during the summer tour of USA and Japan.

Henshaw moved to 13 for the Champions Cup with Nacewa or Noel Reid at inside centre. This is set to continue at international level on the premise that Joe Schmidt has a greater range of options at 12.

Stuart McCloskey could add to the solitary cap he won against England in Twickenham last year but his Ulster teammate Luke Marshall was Schmidt’s starting 12 in two of three summer tour games. Rory Scannell started the first test against Japan with the Cork man subsequently nailing down the inside centre berth at Munster following injury to Jaco Taute.

Bundee Aki could skip pass them all, having qualified via the outgoing three year residency rule. Aki, who could have declared for Samoa or New Zealand, was involved in the most recent national camp in Carton House along with Tyler Bleyendaal, although the currently injured Munster outhalf is not Irish qualified until the Six Nations.

Aki and Henshaw, if selected to face the Springboks, would be renewing their partnership at Connacht before Henshaw moved to Dublin last season.

Van der Flier’s injury comes at the worst possible time as Lions flanker Sean O’Brien is poised to recover from a calf injury and is expected to play at Kingsan stadium this weekend while Dan Leavy returned from ankle surgery at Scotstoun on Saturday.

Rory Best is also back in action, off the bench for Ulster against La Rochelle yesterday, so the captaincy debate can be shelved. The in form Rhys Ruddock led Ireland last summer while Cullen commended Johnny Sexton’s leadership since Nacewa got injured.

“I thought he led the team well all week with Isa being out. Johnny demands high standards of everyone and even the officials at times as well.

“Two of the big leadership calls he had was going to the corner over on that side of the field and the penalty on the 10 metre line just on half-time when in the past you could kick the ball off and the half was up or go for a crack at goal. He was very composed and understands the laws of the game. He kicks to the corner and the forwards delivered. That was a huge moment in the game. Great composure and leadership from him.”

Pádraig Harrington says Ryder Cup must go ahead in September 14:43
Allaho could be Ryanair bound after assured win at Thurles 14:13
Tadhg Furlong could be fit for Ireland’s Six Nations opener against Wales 13:18
Arsenal sign Real Madrid’s Martin Odegaard on loan 12:12
Sergio Garcia has his eyes set on September’s Ryder Cup 12:05
Crossword Get access to over 6,000 interactive crosswords