‘It was a big week for the club for many reasons,’ the Munster captain said 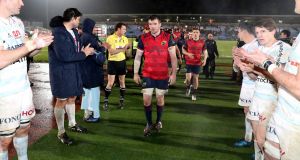 Munster captain Peter O’Mahony leads his team off the pitch at the end of their Champions Cup win over Racing 92. Photo: Billy Stickland/Inpho

The Munster captain Peter O’Mahony admitted it had been “tough to be back” in Paris for their European Champions Cup encounter with Racing 92, which had been re-arranged following the death of their head coach Anthony Foley on the morning of the originally scheduled fixture in October. But given the hauntingly poignant circumstances of the occasion, O’Mahony hailed the maturity of his team’s performance.

“It was tough to be back,” said O’Mahony after their bonus point win. “It was a big week for the club for many reasons and I thought it was quite a mature performance for a side for their first time being over here as a group. The performance was mature so I was happy with the lads.”

After supporters of both teams walked together to the Stade Yves du Manoir before forming a guard of honour for the two teams, inside the ground home supporters unfurled banners with the words “Axel” and “Red Army welcome back”.

In another classy touch by the Parisian club, their players warmed up in red t-shirts with the number ‘8’ and Foley’s name on the backs. This included Foley’s former teammate of many years, Ronan O’Gara, who is in his fourth season at Racing, and is now their defence coach. There was also a minute’s applause from all supporters before kick-off, before Munster set about dismantling Racing with controlled efficiency to earn a 25-0 by the interval and complete their bonus point haul before the hour mark.

“To come away to France against a side with the quality that Racing have and put in a performance like that, you have to take a huge amount of confidence from it,” said O’Mahony. “It’s a very tough place to come and play. We knew that if we let them exert their game plan on us in the first 20 minutes that it would get the crowd in the game and it’s tough to get back in. I think the way we started was the most pleasing thing.”

The win elevates Munster to the top of pool one ahead of a potential group decider away to Glasgow next Saturday, although the bonus point accrued here means they could still conceivably win the pool with a bonus point defeat in Scotstoun given they entertain Racing on Saturday week in Thomond Park.

“We’ve put ourselves in a decent position. You know, as we do, that in this competition it’s week by week and anything can happen. We’ve got to recover now, put in a big week’s training and we have a massive test against an extremely good Glasgow side. A big week.”