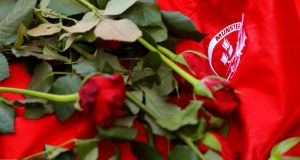 On TV: Live on Sky Sports.

It’s only a game and yet so much more than a game. Munster make an eerily emotional and hauntingly evocative return to the Stade Yves du Manoir for today’s re-arranged encounter with Racing which was postponed on October 16th after the shocking death of their iconic ex-captain and head coach Anthony Foley.

As their technical coach Felix Jones observed to some of the players before they boarded the flight home that night, treks to Paris will forever recall memories of that day, and never more so than this weekend. Where then they flew out from Shannon and back to Dublin, yesterday they left from Cork.

Needless to say, they will not be staying in the same hotel in the western suburb of Suresnes, but rather the hotel where they were based on this exact weekend for their game against the other Parisian Top 14 club, Stade Francais, after that game had been re-arranged following the atrocities of Friday, November 13th, 2015.

As then, the Red Army will be reduced from the 1,000 or so who travelled to the original fixture in round one, but for them too it will be a sadly evocative occasion, as well as another chance to commemorate Foley’s memory.

In a classy touch typical of rugby’s response to Foley’s passing throughout that week, the Racing 92 Supporters Clubs have asked their Munster counterparts to join them to form a guard of honour for both teams as they arrive at the stadium. Supporters of both teams will congregate on rue Paul Bert from 2.30pm local time to walk together to the stadium entrance.

“So it’s a very basic club in other respects. There wouldn’t be the same level of support. The people who do support the team are genuine and quite loyal, but you’d be talking hundreds as opposed to thousands. They were very touched by what happened Axel in Paris. Ireland players and teams are popular in France. They like the Irish people, so they know all about Foley. It was big news over here.”

When they were scheduled to meet in October, Racing were pool favourites after reaching last season’s European Cup final before winning the French Championship, whereas Munster were the group outsiders. Now Munster are two points off Pool One leaders Glasgow with today's game in hand and Racing, after losing three out of three, are out of contention.

Racing’s attitude to this re-arranged game will be intriguing, and O’Gara freely admits: “The focus now is Lyon,” in reference to their game immediately following these three European ties. “If you want to play against Lyon in four weeks’ time you’ve got to perform in these three games.”

Nonetheless, at the Stade Yves du Manoir especially, Racing’s fans will expect them to perform. “Our team is not full of the so-called starting first team but that may not necessarily be a bad thing. You need a competitive squad, and you need people performing, and that hasn’t been the case as much as we would have liked. You don’t know the mentality, but also there could be a bit of fight. Now that some of the senior players aren’t playing, is that an excuse to not perform?”

Looking at their star-studded team sheet, one would hardly think so. True, Racing have made no less than a dozen changes from the starting XV which fronted up away to Toulon last Sunday, with winger Teddy Thomas, lock Francois van der Merwe and ex-All Blacks back-rower Chris Masoe the trio retained.

As expected, Xavier Chauveau and Benjamin Dambielle replace Maxime Machenaud and Dan Carter at half-back, yet most of those recalled are not exactly from the espoirs.

For example, leading try scorer Juan Imhoff is recalled after being granted a festive trip back to Argentina in light of his exploits in the Olympics, as is Joe Rokocoko and another former All Black, ex-Munster centre Casey Laulala. Antonie Claassen comes into the backrow. Interestingly, Carter is still selected on the bench, as is the Munster-bound scrumhalf James Hart.

French clubs may be notoriously diffident and dilettante when out of contention, but that is more normally the case away from home. There are plenty examples of French teams with seemingly nothing tangible at stake whose players relish being granted a relatively rare start.

All it can take is an early try or penalty, or for that matter a potent scrum, and home team and crowd alike come alive. It’s also worth noting that while they were beaten at home by Glasgow, and they have been targeted mercilessly on the road, domestically this season they have won seven from seven at the Stade Yves du Manoir, where they have won 23 of their last 26 games.

Munster will need to be on their mettle. Their 10 changes from the sleeves-rolled up win away to Connacht restore them to a more recognisable Euro line-up, with the boost of Tommy O’Donnell being passed fit. Encouragingly, their scrum and defence have been bedrocks for solid away form, even if mistakes undermined them in Leicester last time out.

That defeat has suddenly left them little elbow room, and makes this game pretty much must-win. Otherwise, Glasgow away will definitely fall into that category.

Of course, ever since that day in October and the traumatic week which followed, Munster have delved into the Munster zeitgeist. They beat Glasgow in the manner of old at a packed Thomond Park the following Saturday, and in the process ignited a run of nine wins in 10.

If they show anything like the same patience and accuracy as they did against Leinster, not least when going through 23 phases for the pivotal pre-interval try by Ronan O’Mahony, then they ought to have too much for the French champions. And as well as a rediscovered potency up front, they have outstanding players like Conor Murray, Jaco Taute and Simon Zebo in prime form, which the cold but dry weather oughtn’t to nullify.

While this could be a tryingly difficult day for them, history has also told us that few teams on the planet respond to a highly charged occasion – all the more so if they have an additional cause to play for – than Munster.

Ultimately, this matters way more to them on so many levels, and one imagines that will tell.