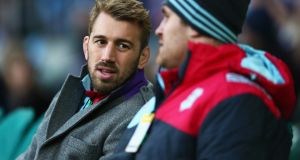 The prospect of Chris Robshaw missing some if not all of the Six Nations became probable on Friday when Harlequins said the flanker would either need shoulder surgery or an extended period of rest and rehabilitation.

Robshaw suffered the injury in the first-half of Quins’ defeat at Worcester last weekend, his first appearance for the club since the end of October. “Chris will see a specialist early next week to determine the best course of action for his recovery, either an extended period of rest and rehabilitation, or an operation,” said Quins.

A year ago, Robshaw’s future looked uncertain. England had exited the World Cup early, Stuart Lancaster had left as head coach and his replacement, Eddie Jones, had questioned whether the player who had captained the side for four years was an international quality open-side flanker.

Jones moved Robshaw to the blind-side and the 30-year old played a key role in helping England go through 2016 unbeaten, but with Billy Vunipola out with a knee injury England face having to remodel their back row for the Six Nations opener against France at Twickenham.

Better news for Jones is that his open-side flanker in last year’s Six Nations and tour to Australia, James Haskell, is set to make his first appearance of the season on Sunday having been named on the Wasps’ bench for the match against Leicester in Coventry.

A potential replacement for Robshaw is the second row Maro Itoje, but Jones does not know yet how many of his locks will be fit for France. Joe Launchbury is out with a calf injury and George Kruis is unlikely to return for Saracens before the France match having fractured his cheekbone.

If Itoje remains in the second row, Jones would have the option of moving Haskell to the blind-side and playing Tom Wood or Teimana Harrison at 7 or giving the Leicester flanker Mike Williams his first cap. Wood is also an option at 6.

The outside-half Rhys Priestland has signed a new contract with Bath which will probably end his Wales career on 48 caps because of the Test quota on players who do not play for one of the four Welsh regions. Bath were keen for him to commit with their England 10 George Ford set to leave at the end of the season.