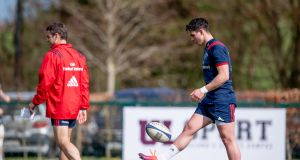 Munster are the first up of the three provinces in Champions Cup action this weekend, as they travel to play Edinburgh in Saturday’s opening quarter-final.

It has now been more than 10 years since Munster – so indelibly linked with the competition – last won the Heineken Cup.

Victory at Murrayfield would see Johann van Graan’s side reach a third-consecutive semi-final – with the province always bumping into one too good in the competition’s penultimate round.

Standing in their way on Saturday are an Edinburgh side who have been rejuvenated under head coach Richard Cockerill, and are making just their third-ever appearance in knockout rounds.

Munster, on the other hand, are set to make their 18th quarter-final appearance. But while the visitors have the European pedigree and favouritism heading into Saturday’s match, Edinburgh’s cast of Scottish internationals make them a force to be wary of.

And here is everything you need to know before Munster take on Edinburgh in the Scottish capital.

Munster travel to play Edinburgh in the quarter-finals of the Heineken Champions Cup.

The match kicks-off at 12.45pm on Saturday, March 30th, at Edinburgh’s Murrayfield stadium.

Great news – Saturday’s match is being broadcast on free-to-air television, by both Channel 4 and Virgin Media One. If that isn’t the perfect way to start the weekend, then I’m not sure what is.

You can also watch the match on BT Sport – or follow via the Irish Times liveblog, which will be up and running from around 12pm.

Edinburgh released a statement on Thursday saying they were nearing a 35,000 attendance for Saturday, and you can still buy tickets on general sale here. You could do far worse than a weekend in the Scottish capital.

This is the first time in the history of the Heineken Champions Cup that two Scottish sides have qualified for the knockouts, and it was Edinburgh who set the pace this year ahead of Glasgow. Cockerill’s side topped what looked like a difficult group after getting off to a poor start – they lost to Montpellier in the opening round but then won their next five games on the bounce. That included doubles over three-time winners Toulon and English Premiership side Newcastle Falcons, before they exacted revenge over Montpellier.

Munster also topped their group, and did so in a very Munster-like manner. They started with a hard-fought 10-10 draw away to the dangerous Exeter Chiefs, before thumping Gloucester in Limerick. They beat Castres at home but lost narrowly to the Top 14 champions away, before thrashing Gloucester again – this time 41-15 at Kingsholm. They needed a result in their final fixture to guarantee top spot in a tight pool and they just about managed it, edging Exeter 9-7 in front of a packed Thomond Park.

Johann van Grann has a relatively clean bill of health, with Joey Carbery – who this week signed a new contract with the province until 2022 – coming back from a hamstring injury.

Edinburgh meanwhile have one glaring absence - flying back Blair Kinghorn is unavailable after injuring his ankle during the Six Nations. Cockerill has been able to welcome back John Barclay, however – the backrow made his return from an achilles injury in last Friday’s Pro14 win over Leinster, after a lengthy spell on the sidelines.

Munster captain Peter O’Mahony, on the European buzz: “I had a nice few days off, spent some time with the family and back in here to a great buzz. There’s a great buzz around here now, back into the lads. You can tell straight away when there’s Europe coming up. You come in the door of the place and there’s a great buzz always. It’s good to be back.”

Edinburgh boss Cockerill draws the battle lines: “We’re going to go full blown into the battle and take them full on. We are going to enjoy the contest and see if we’re good enough to do it. We’ll try and out-Munster Munster, as we’re two sides that play quite similar rugby.”

What about to win the tournament?

Munster are the fourth favourites – the bookies are giving Edinburgh less of a chance:

Saturday is forecast for around nine degrees and showers – Munster won’t mind the rain.

France’s Pascal Gauzère is in charge in Edinburgh.

The road to Newcastle

The winners of this fixture will play the winners of Saracens against Glasgow Warriors. An all-Scottish semi-final – to be held at Murrayfield – would be unprecedented but also looks unlikely.

Joey Carbery could be the man to take Munster to Newcastle. . .

At least whoever loses won’t have to travel to play Saracens. . .