Matt Healy and Rory Parata in from start for Connacht

‘With only nine fit backs available to us, it’s forced me to name a 6-2 split on the bench’ 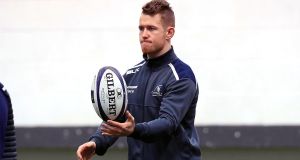 Matt Healy is back in the Connacht XV this weekend. Photograph: Donall Farmer/Inpho

Connacht have made four changes in personnel to the team that lined out in Coventry five days ago, for the visit of Wasps to the Sportsground on Saturday .

With Stacey Ili sidelined through injury, 22-year-old Rory Parata is named in the centre for his first Champions Cup start while Ireland international Matt Healy comes on to the left wing for the injured Cian Kelleher.

Up front, international prop Finlay Bealham packs down with Denis Buckley and Tom McCartney. The back row is reshuffled with the introduction of Eoin McKeon at blindside flanker while Nepia Fox-Matamua shifts to openside in the absence of injured Jake Heenan.

From the bench, Fijian international Naulia Dawai is in line to make his Connacht debut having arrived at the club last month. The 29-year-old is one of six forwards named among the replacements with Caolin Blade and Danie Poolman the only two remaining backs available for selection from the EPCR-registered squad.

“With only nine fit backs available to us this week, it’s forced me to name a 6-2 split on the bench for the first time with Caolin Blade having to cover the outhalf position.

“So with those injuries as well as the short turnaround, it’s been a fairly light week in terms of physical preparation out on the pitch. We’ve put a big emphasis on our mental prep and ensuring that we are all crystal clear in terms of what we need to do tomorrow afternoon.

“Without a doubt this game is massively important in the context of our European ambitions. Win and we’re back at the top of the pool and in a really good place after four rounds. That’s the outcome we all want, but it’s all about the performance first and foremost.”